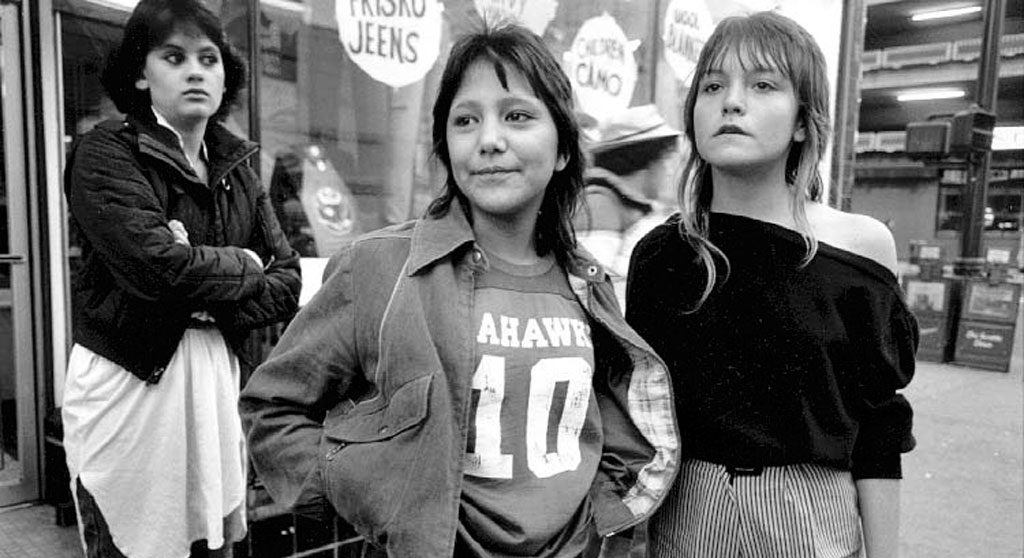 This weekend brings three tales of troubled street kids to the Brattle Theatre screen. First up is the new restoration of “Streetwise,” Martin Bell’s alluringly intimate 1984 documentary about drifters, grifters, thieves and prostitutes on the street of Seattle in 1983. In one scene, a young girl in for treatment for an STD is asked about her periods and matter-of-factly responds she got her first one a month ago; she goes on to tell the physician about her johns and what she would do if she got pregnant (abortion). Her future seems dim, as does that for many of the kids living in an abandoned factory. The film – nominated in the Best Documentary category for an Oscar that year – gives unflinching, raw and unparalleled insight into a street culture and its survival-minded social hierarchy amid eternally present demons of drugs and dangers of predation. Bell was inspired to make the film by his wife, photographer Mary Ellen Mark, who was shooting on the same subject for Life magazine at the time. Gus Van Sant’s 2007 gritty slice of Pac-North street life, “Paranoid Park” feels born directly from “Streetwise.” Bell would go on to make one fictional film, “American Heart” (1992), starring a buff Jeff Bridges as an ex-con getting tracked down by a teenage son (Edward Furlong). If “Streetwise” moves you, add it to your streaming queue and thank me later.

At the end of “Streetwise,” playing Friday through Sunday, many will wonder what happened to those kids. For one, Tiny, that confident girl in the clinic, Bell did a 32-year follow-up. “Tiny: The Life of Erin Blackwell” (2016) – on a double bill with “Streetwise” on Saturday and Sunday – provides answers both bitter and a little sweet. Tiny indulged in plenty of drugs over the years and bore plenty of progeny, and the rewind of struggle and heartbreak become testimony to the dark underbelly of the American Dream. In the film you can hear Mark asking Tiny questions from off camera – a touch eerie, as Mark passed away in 2015, but it ultimately makes the film, which includes outtakes from the earlier project and plenty of her photography, a final, loving embrace of Bell’s betrothed.

Playing alongside the films Friday through Sunday in the late show slot is “Tigers Are Not Afraid” (2017), the Mexican chiller about street kids caught in the crossfire of a drug war and something supernatural. Directed by Issa López and endorsed warmly by Guillermo del Toro (“Pan’s Labyrinth”), the film is imbued with “troubled young encountering the eerie” roots akin to Jennifer Kent’s “The Babadook” (2014) and de Toro’s own “The Devil’s Backbone” (2001).