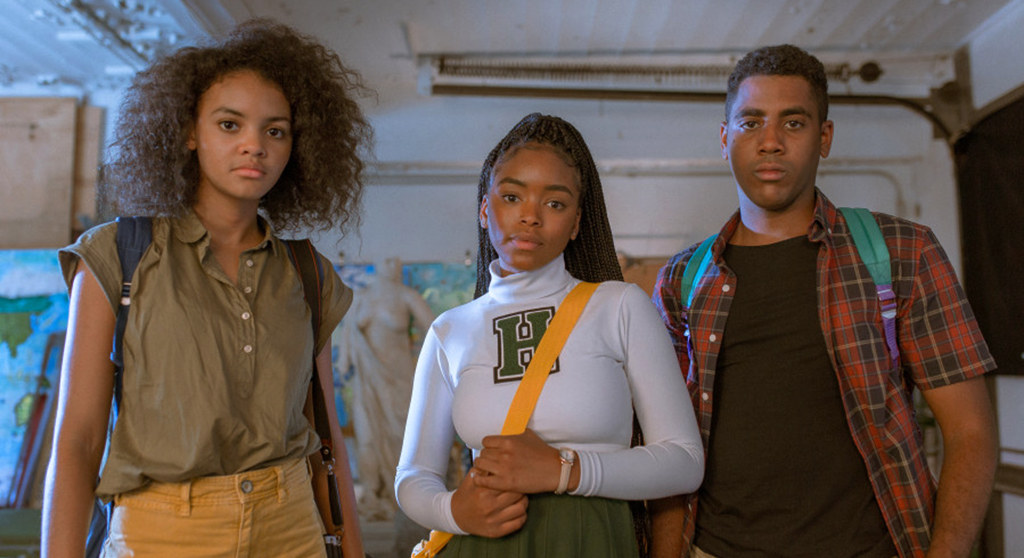 It looks like virtual viewings have arrived, a model of exhibition that allows distributors to release new movies before general home release, like with theatrical windows. The Somerville Theatre is taking part, and the Brattle dove in with “Roar” and “Other Music” screenings last week. Look for this trend to grow and expand.

Bigger studios too are making past films available on YouTube, Facebook and elsewhere. Focus Movie Mondays has “Mallrats” (1995) slated for Monday, and distributor Lionsgate screens at 9 p.m. Fridays with “Dirty Dancing’’ (1987), “La La Land’’ (2016) and Keanu killing scads of baddies in “John Wick’’ (2014). Jamie Lee Curtis will host the Lionsgate screenings, which are free – any donations from the events going to provide assistance for furloughed theater employees. And over on Cya.Live, on Fridays at 8 p.m. Paramount hosts “Star Trek II: The Wrath of Khan’’ (April 25), and “Breakfast at Tiffany’s’’ (May 2) for $2, with special guests TBD.

Also thanks to North Cambridge resident Steve Prowten for the timely reminder that the Cambridge Public Library offers free access to a series of digital collections and streaming services, with thousands of film titles.

A small family film tackling contemporary issues lands on digital-on-demand platforms iTunes and Google Play before coming to a more general streaming release. Abe (Noah Schnapp of “Stranger Things”) lives in Brooklyn with his Jewish mother and Muslim father. The 12-year-old wants to be a cook (ramen tacos, anyone?) and instead of going to summer camp, plays hooky to work at a Brazilian barbecue. Home life is pretty tense and comes to a head when his respective pairs of grandparents – all old-country loyalists – get together for a sit-down. Light and lean, with just enough bite.

We lost a great one last week: Brian Dennehy, best known for his stage work in Arthur Miller’s “Death of a Salesman,” also played opposite Sylvester Stallone’s Rambo in “First Blood” (1982) and as Tommy’s dad in the Chris Farley comedy “Tommy Boy” (1995). Here under the direction of Peter Greenway (“The Cook, the Thief, His Wife & Her Lover”) Dennehy plays an American architect in Rome being slowly poisoned to death (the belly of the title) by his wife Chloe Webb, who’s having an affair with his rival. Dennehy is outstanding as a man out of his element, and the cinematic rendering of Rome’s classic structures is a visual feast.

If you can’t find the flick online, Amazon and Xfinity has quality Dennehy in “F/X” (1986 – dated but still fun) and the aforementioned Stallone revenge flick, “First Blood.”

Writer-director Tayarisha Poe’s debut feature is an edgy, brilliantly shot mixed bag about a haughty boarding school that’s like “Rushmore” (1998) with an infusion of “School Daze” (1988)/“Dear White People” (2014). The titular Selah (a breakout for Lovie Simone) is the fierce and fiery can-do head cheerleader and supplier of contraband on campus – cross her and you’ll look like Rocky at the end of the movie. The film ostensibly wants to be something of a journey built around Selah’s fabulously coifed protege Paloma (Celeste O’Connor), but the arc gets lost in the trench wars of the boarding school cliques. Lots of promise here; look for for more from Poe and her young stars.

The film that cemented Sean Penn as an A-class thespian. Directed by the great John Schlesinger (“Midnight Cowboy” and “Marathon Man”), the film tells the real-life story of two childhood friends (Penn and Timothy Hutton) who stumble into the spy game. Hutton’s idealist wanted to be a priest but ends up working in U.S. intelligence, and Penn’s struggling drug user digs up unsavory contacts south of the border who lead to Russia. It’s a powerfully rich character study and a cautionary tale about jumping too far ahead if it looks too good to be true. “Snowman” was shot by Allen Daviau (“E.T.,” “The Color Purple” and “Bugsy”), who died last week from complications from Covid-19.

Okay, yes, I watch a lot of Sergio Leone films. And why not? They’re cinematic masterpieces that yield something new with each re-see. They’re also social distancing films. Like the Sad Hill Cemetery scene in “The Good, the Bad and the Ugly” (1966), the languorously meticulous opener here with Jack Elam, Woody Strode and Charles Bronson at an isolated train station in the desert might be a lesson for us all – I mean, there’s that spacious spread among the gunmen so one shooter can’t take them all out with one well-aimed bullet stream. The phenomenal cast includes Henry Fonda playing against type, Jason Robards and the ethereal (and fiery) Claudia Cardinale, plus another defining score from Ennio Morricone.

Sure, not on par with the 1967 original that paired Dudley Moore as a simp with a racy Raquel Welch as the devil, but this Harold Ramis-directed update earns its own set of horns. First off, it’s a reminder of just how good Brendan Fraser’s goofball routine (“Monkeybone,” “Encino Man”) was in the 1990s, and Elizabeth Hurley, looking fashionable and sly as Old Nick, has the sassy sexiness of Welch while adding a knowing nod. Some of the reinvented wishes of the plot, such as Fraser as Michael Jordan, are hilarious time capsules. The leads play well together, but the secret sauce is the cheeky, twisty script by Ramis, Peter Tolan and Larry Gelbart.

Not as godawful as the reports out of Sundance, but not good by any stretch. The film, which pairs Anne Hathaway’s journalist with Willem DeFoe as her father and Ben Affleck as a Reagan administration bagman, feels righteous at first, but the narrative about illegal Iran-Contra aid to Central Americans with dubious agendas jumps the tracks and becomes muddled. It seems an unlikely result, as it’s directed by Dee Rees, who scored with “Mudbound” (2017), and based on Joan Didion’s bestselling novel. The sense of tension and the stakes remain high from frame to frame; it’s just what connects them that’s often absent.

In the ’80s and ’90s Paul Verhoeven made some of the most socially biting and campy cool sci-fi films around. Take “Robocop” (1987) or “Total Recall” (1990) – and this adaptation of the Robert Heinlein (“Stranger in a Strange Land”) novel about humans at war with a legion of bloodthirsty bugs. No, it’s not “Them!” but is nearly as campy. The scariest things in the film are handsome lad Casper Van Dien’s protagonist’s parents, who dictate he go to Harvard instead of to war, and the shameless fake-news propaganda used to recruit warriors. The film would make Denise Richards a household name, but the neat, break-the-glass-ceiling takeaway is a military where men and women are equals, including shared shower bays.

The best documentary of 2019 wasn’t even nominated for the Oscar, but here it is. When you hear it’s told through archival footage, you may roll your eyes (“I’ve seen it all before”), but be prepared to be blown out of this world. The meticulously told odyssey of the first moon landing amazingly feels new, alive and, at times, as if a script we know from history might not happen. Told in a pat, real-time format, there are no filmmaking tricks; the footage alone relays the heroism, risk and triumph with such a deep emotional impact, it will likely surprise you. When you think about it, no one’s ever socially distanced farther than Neil Armstrong and Buzz Aldrin. The film’s fairly age appropriate and a bit of American history the whole family can and should take in together. 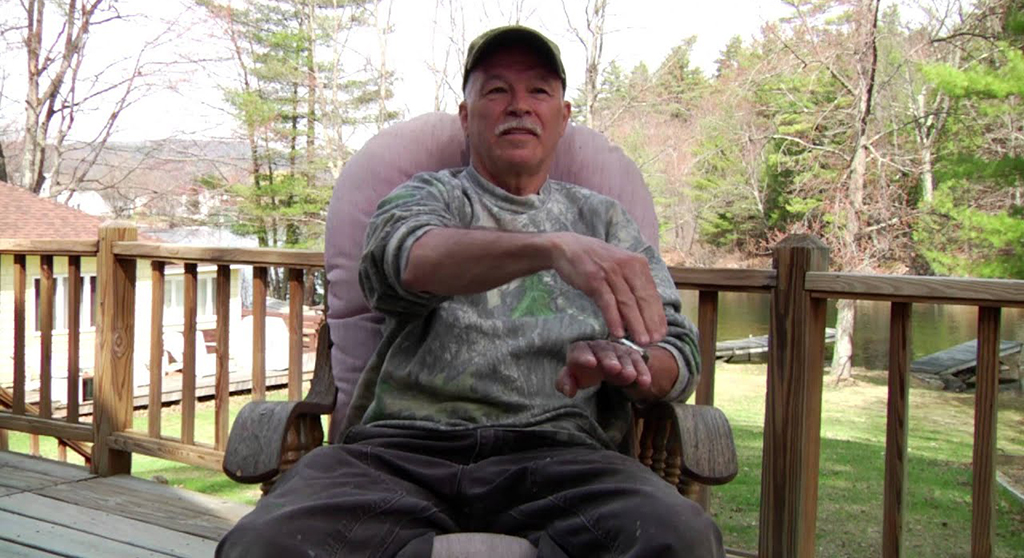 Lena Friedrich’s documentary about the enigmatic North Pond Hermit (aka Christopher Knight) is free and available on Vimeo. Knight lived in the woods of Maine with no human contact for 27 years. His mysterious existence, marked by house/cabin break-ins in the middle of the night for pantry raids, became East Coast lore and a source of nuisance and invasion for those hosting his means. The short doc is mostly a profile of rural Maine life and the arduous process of tracking Knight by legal authorities. The film never comes full circle as you might hope, but it is a piquant glimmer into a unique locale, a way of life and most of all, a social distancing phenomenon at its ultimate.