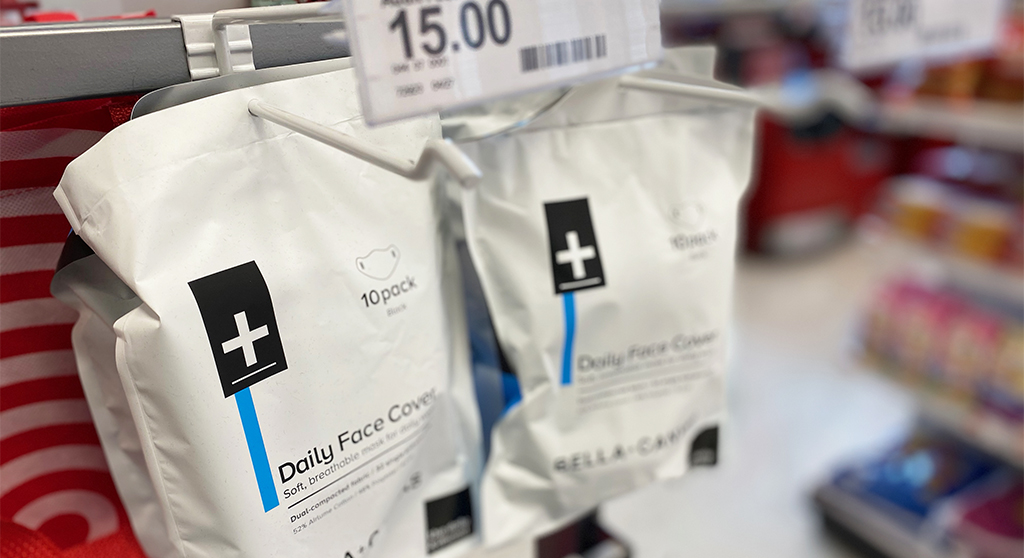 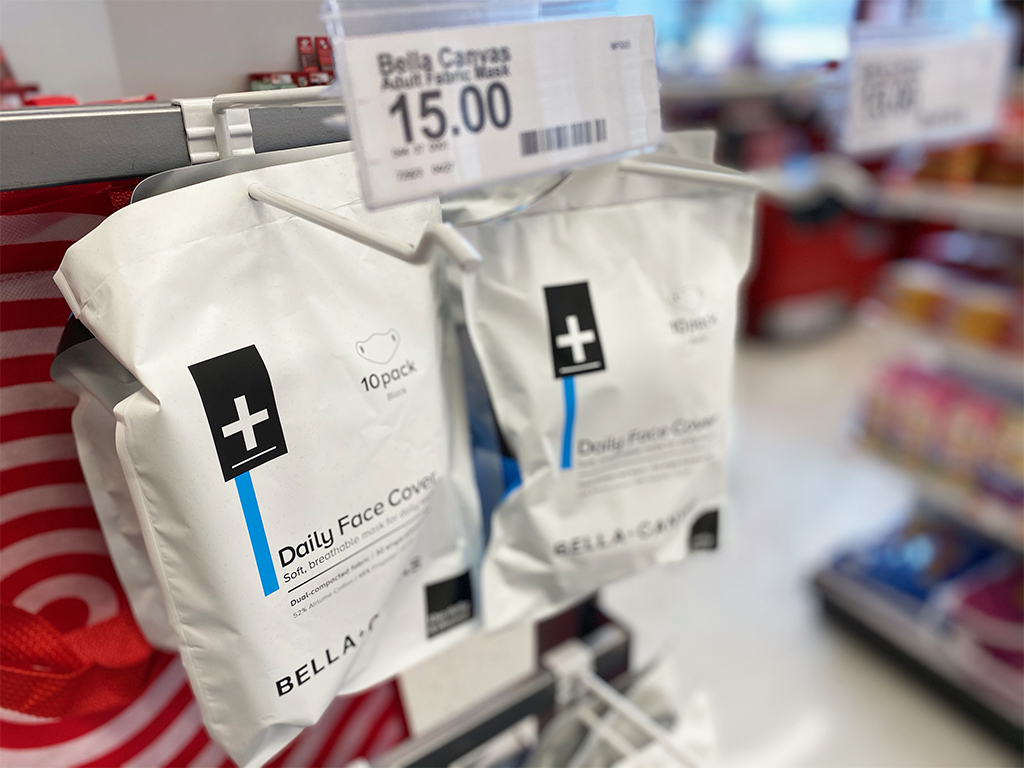 Masks meant to prevent the spread of coronavirus are more available than in past weeks – even becoming impulse items at Target stores in Cambridge. (Photo: Marc Levy)

The use of masks to keep coronavirus infections down was discussed plenty among city officials Monday, but the night still ended with confusion and an angry outburst.

One source of confusion that the city manager and other top staff failed to clarify: a statewide order from Friday signed by Gov. Charlie Baker that goes into effect Wednesday and – as publicized by the City of Cambridge in its official postings and e-mails late last week– contradicts the city’s own order in a couple of ways, including requiring masks for people 2 and older “in public places where maintaining proper social distancing measures [is] not possible.” In Cambridge’s order, those 5 and older must wear masks “in all public places, businesses and common areas of residential buildings.”

There was also concern from city councillors that while the orders set out $300 fines for people in violation, city officials say education is their goal, a conflicting message that may be seen differently by different populations in the city and managed unevenly by police.

A message posted Friday by the City of Cambridge sowed confusion over conflicting mask orders, but city spokesmen did not respond to requests for clarification,

An order noting that the city’s approach did not reflect the latest science on transmission of the coronavirus, while the governor’s did, was set aside until the next council meeting, though Mayor Sumbul Siddiqui said she would bring it up to the city manager’s task force Tuesday in the interest of “not having murky policy.”

In the meantime, residents are confused and nerves are fraying, said councillor Patty Nolan, author of the policy order that was set aside.

“A runner or cyclist or pedestrian walking down the street many feet away from others does not pose a danger. By suggesting that outdoors, people who are distant can pose a threat, we are needlessly accelerating people’s anxiety,” Nolan said.

She pointed to the Thursday arrest of Michael Nichols, 43, on charges that on April 20 he pulled a knife on a runner at Putnam and Massachusetts avenues whom he thought was coming close enough to his young daughters to infect them, cursing at the runner to get “on the other side of the street.” More recently, a 13-year-old runner was accused of spreading Covid-19, a parent told Nolan, and “another parent wrote about their 11-year-old being in tears, far away from others in a park [but] being told that they were endangering others,” Nolan said.

“We need to be much clearer about the indoor issue,” Nolan said.

Cambridge sowed confusion posting the statewide order by saying it “supersedes previously issued guidance relative to mask use” without making it clear that what was superseded was the governor’s own guidance from April, not the city’s law. Two city spokesmen were asked over the weekend to clarify, but did not. They were asked again Monday, and still said nothing.

A representative for the City of Somerville, who called immediately upon seeing the same weekend email seeking clarification, explained that the governor’s statewide order “does not supersede” how Somerville enforces its emergency mask ordinance.

Cambridge City Manager Louis A. DePasquale made an effort in the same direction Monday to councillors, explaining that in the densely populated cities of Eastern Massachusetts, “you can think you’re on an empty street and make a turn and find a lot of people, especially in certain parts of the city,” he said. “What we are facing, like Somerville is facing, is different than what other cities and towns – especially in the western part of the state – may be facing in terms of distance.”

Different, but not compared

Officials’ attempts to explain what was happening could also be bewildering. Claude Jacob, Cambridge’s chief public health officer, spoke for 24 minutes straight Monday with an update on various Covid-19 matters, including pointing out the differences in mask orders.

Jacob did not, however, say which order Cantabrigians were supposed to follow, or what the nuance meant. (Like the state, Somerville calls for masks on people down to age 2.)

More masks on the way

Anecdotally, more people are wearing masks than in recent weeks, according to city staff and councillors who were out in public this past weekend, and police commissioner Branville G. Bard Jr. said efforts to hand out 10,000 masks from 10 locations citywide and out of police cruisers has been extremely successful. Though there are shortages worldwide, Cambridge has managed to get another shipment of 13,000 masks as early as Tuesday to continue the free distribution.

A surprise shipment of 13,000 arrived Monday “that we could not accept delivery of because of the extremely poor quality,” Bard said.

“I’m glad that masks are being distributed now, but that wasn’t announced initially – it’s part of the reason we started putting this policy together,” said councillor Jivan Sobrinho-Wheeler, a co-sponsor of Nolan’s order with councillor Quinton Zondervan. “I’ve heard from some folks, ‘Well, the police aren’t going to be handing out a lot of $300 fines, so we don’t have to worry about anything.’ But I just want to acknowledge that we as city councillors have a lot of privilege that not all Cambridge residents have.”

It didn’t help that Sunday afternoon, Cambridge Police Superintendent Jack Albert, a 32-year-member of the department and native Cantabrigian, accidentally used the department’s official Twitter account in an online conversation to bash U.S. Rep. Joe Kennedy III as “another liberal fucking jerk” – in a city renowned for its liberalism. The tweet was deleted quickly, and Albert apologized via Twitter on Monday afternoon, with a police spokesman saying he remained subject to disciplinary action, though the department was restricted from identifying the punishment.

It was “the kind of thing that raises the concerns that some residents have,” Sobrinho-Wheeler said.

Zondervan stopped discussion about Nolan’s order for a week by using his “charter right” to create time for the clarification the mayor hoped to find. The tweet incident underlines why, Zondervan said, because it showed “some of the bias that can exist in the police – and exist in all of us – and we need to be vigorous in protecting against that.”

“There’s also some confusion between this order and the city manager’s and the governor’s order that takes effect on Wednesday. We need to get some clarification about which order takes precedence,” Zondervan said.

Milder than pulling a knife on a jogger, making children cry or insulting the vast majority of residents in the city you police, there was one more dramatic moment for councillors to chew over Monday, as councillor Tim Toomey expressed anger late in the meeting that masks were still being discussed at all.

“Five months into this pandemic the City Council is still debating about proper use of masks. I find it astounding and embarrassing that a policy that’s put in place to protect and save lives, we are nitpicking all different kinds of scenarios. All we’re asking is people to use the masks at all times,” Toomey said, before being cut off by Siddiqui for being out of order. “It’s common sense – what is wrong with common sense?”

The city began talking about coronavirus in earnest as long ago as two months, or almost nine weeks, but didn’t begin shutting down until mid-March. Shortages in personal protective equipment that needed to be prioritized for health care professionals, and guidance from the state Attorney General’s Office that cities and towns could not mandate that residents wear masks, meant Cambridge officials didn’t really pick up the matter until mid-April, around three weeks ago.