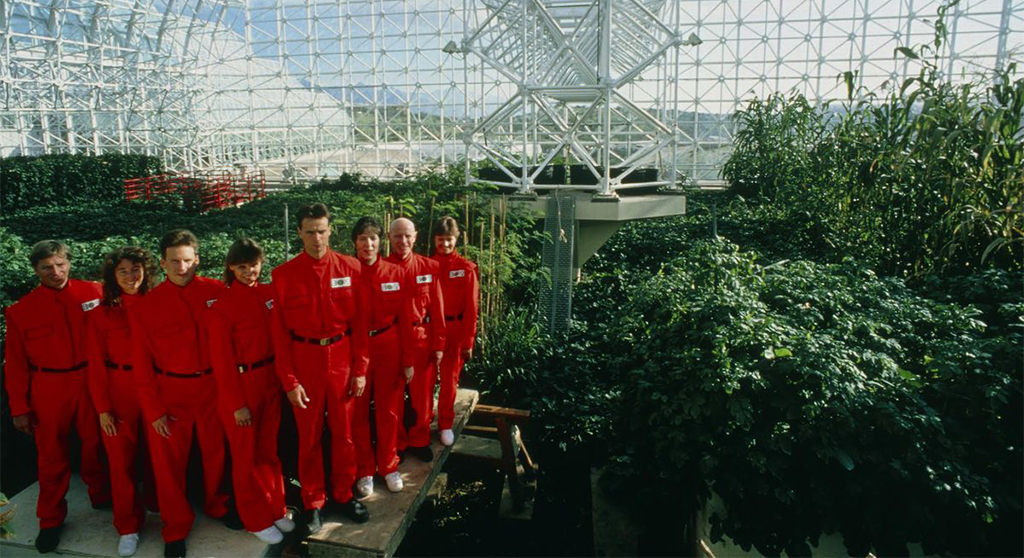 One of my daughter’s favorite rides at Disney World is Spaceship Earth, so it caught her attention when I told her I was seeing a movie called just that, and left her crestfallen when she learned it was essentially a Nat Geo special about old people living in a greenhouse in the desert. The documentary by Matt Wolf follows the rise and fall of (and what went horribly wrong with) Biosphere 2, the artificial environment built in Oracle, Arizona, where, from 1991 to 1993 eight people sealed themselves off in a self-sustaining complex as an experiment to see if humans could live in a contained terrarium without the regular gifts of Mother Earth – aka Biosphere 1.

The stage is set as a bunch of San Francisco idealists and entrepreneurs caught between the Wall Street greed of the 1980s and the Internet bubble conceive an experiment in controlled sustainability and, with deep pockets, build it and select their earthbound astronauts – which, like the Starship Enterprise, has a scientist, doctor, biologist and engineer among the crew. Their mission: to live in the mini Earth (it has its own sea) for two years without contact, nutrients, sustenance or air from the outside. Sunshine is fair game.

Given where we’re at today, you could view Biosphere 2 as the ultimate quarantine, but it’s when personalities take center stage that “Spaceship Earth” gets interesting. Of the eight people in scientific lockdown there’s a couple, a fitness freak physician who waves his virility wide and high to a near gonzo degree, and the must-have MacGyver, ever with screwdriver in hand and donning a utility belt as things go bust now and then. The big challenges inside the bubble come when oxygen levels get low, or one woman gets her hand caught in a straw shredder; outside, project head John Allen, who comes off as something of a cult leader, is embroiled in court proceedings regarding control of the endeavor. It’s one of a few small failings of Wolf’s doc that the enigmatic persona of Allen, a self-described ecologist and early climate change whistleblower, remains vague and unprobed. As the film has it, many in the science community labeled him a hack and Biosphere 2 a stunt producing no real data of value. Times have changed, however, and that’s another failing: There’s no contextual relevance for the experiment to our Biosphere 1 today.

Wolf’s straight-ahead use of archival footage and interviews with surviving terrarium astronauts (terranauts) is effective in conveying the more intriguing narrative of how personalities played off each other in such a confined petri dish. It’s a chronicle of a curious blip in history, a time capsule of the era and food for thought for the future, especially in these self-contained times.