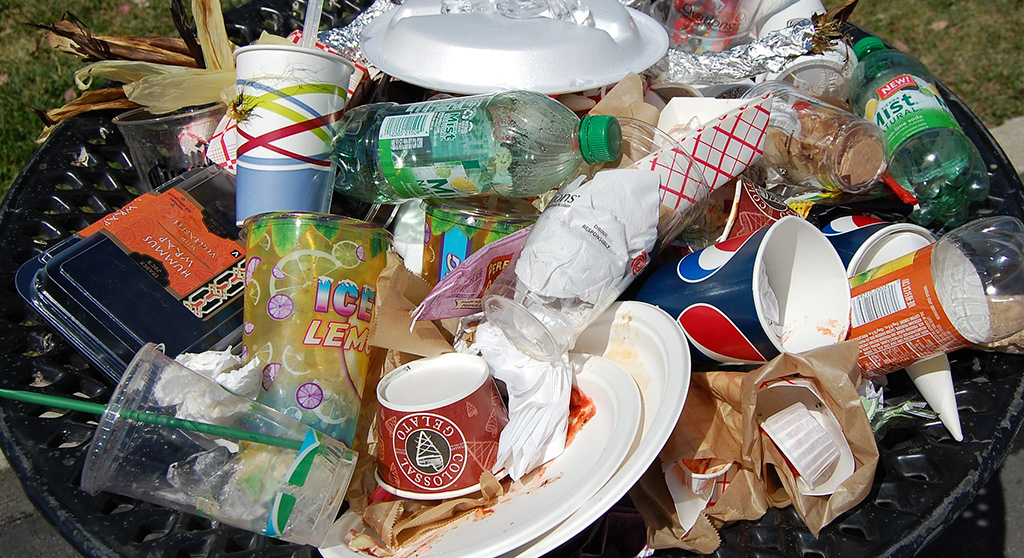 A sampling of modern waste. (Photo: Kevin Krejci via Flickr)

When we’re done with something, we consider it “waste” and throw it away. Except there is no “away.” Every item, every piece of packaging, every plastic bag, every “disposable” cup, every water bottle that enters the waste stream – it does not go “away.” It’s burned in an incinerator or buried in a landfill, and leaves a dirty mark on human and environmental health.

It doesn’t have to be like this. Right now we have an opportunity via the stare Department of Environmental Protection to set Massachusetts on a different path, one that leads to zero waste. Every 10 years, the department issues a decadelong Solid Waste Master Plan for how we deal with waste, and right now its considering the 2020-2030 plan.

Our current path is unsustainable. Massachusetts generates 5.7 millions tons of waste a year, disposed of in landfills, incinerators or exported to other states to be buried or burned.

Burning waste – which is how we dispose of 3.2 million tons of our garbage every year – pollutes the air, water and land for miles around. Despite the incinerator industry’s branding of burning as “Waste to Energy,” incineration is a dirty, expensive and inefficient way to produce energy. According to a report from the Institute for Local Self Reliance, “Incineration has managed to bill itself as a solution to cities’ waste and energy needs, while failing to do so cost-effectively or sustainably. Instead of turning waste into energy, incinerators are wasting energy and money.”

Landfills are just as bad, polluting air and water while wasting resources and occupying what could be open or green space. According to the Conservation Law Foundation, “In theory, once trash is deposited in the landfill, that’s where it stays. In reality, that’s far from the truth. All landfills leak – some over time and some from day one of operation – leaching toxic chemicals into the ground and the water supply.”

There is no reason to put up with burning or burying millions of tons of garbage each year. We have the opportunity to aim for zero waste.

Most observers agree that more than 75 percent of what we throw away could easily be diverted from landfills and incinerators. For example more than 30 percent of our waste is organic – food and yard waste.We don’t need to invent anything to divert this waste and compost it; we simply need to change our infrastructure from disposal to reuse – shifting, for example, from incinerating or landfilling organic waste to large-scale composting. Most of the rest of our waste is paper, cardboard, wood, metal, glass, single-use plastics and other materials that could and should be reused, banned or otherwise diverted.

We have the opportunity to take a big step toward zero waste right now. Until Tuesday, the DEP is taking public comment on its plan. Public comment is crucial, so the state hears from people – not just the waste industry – about how important it is for us to reduce, stop wasting and move away from “throwaway” culture. It’s easy to send an email. And while Tuesday is the “official” deadline for public input, the department always needs to hear about the public’s desire to reduce waste.

Your voice is particularly important because there are powerful interests with a stake in the wasteful status quo. As soon as the pandemic took hold this spring, the plastics lobby came out in force, claiming that disposables would be more “hygienic.” A wave of emergency orders put a temporary halt on reusable bags until the industry claims were debunked. Whether it’s the chemical industry lobbyists who show up at the Legislature to defeat bans on single-use plastic or the plastics industry lobbyists shilling for disposables, there is no doubt that their voice will be loud and clear. Let’s all speak up together for a cleaner, healthier future in Massachusetts and ask the DEP to set a goal for zero waste by 2030.