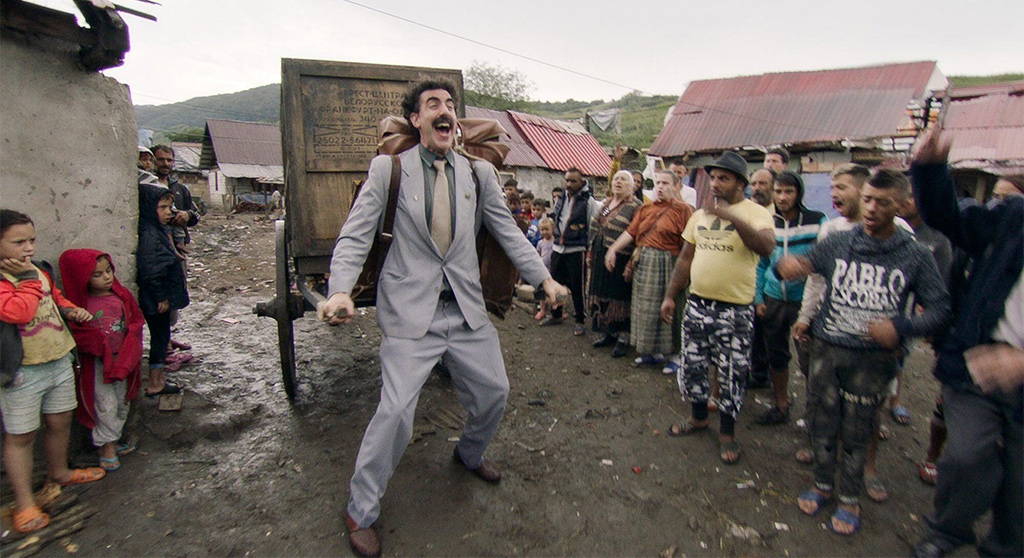 People thinking back to Sacha Baron Cohen’s gonzo 2006 mock-doc “Borat” will certainly remember that pud-padded, shoulder-looped green G-string, but may have forgotten how the bold and experimental film pulled the mask off bigotry and entitlement in the United States. With “Borat Subsequent Moviefilm,” Baron Cohen’s back with more of the same, but this one’s more targeted, loaded and timely. It doesn’t pack quite the same zany eye-pop – that bud’s bloomed – but it is the first film in my mind to tackle both Donald Trump’s divisive presidency and the Covid pandemic.

The setup is fairly simple, though the execution is not: In Borat’s native Kazakhstan, just out of a gulag, the overly zealous (and clueless) journalist is tasked by authorities with delivering a gift to the Trump administration so Kazakhstan can gain favor among other strongman countries of the world – Russia, Syria and so on. The film’s extended title is: “Delivery of Prodigious Bribe to American Regime for Make Benefit Once Glorious Nation of Kazakhstan.” The bribe? National treasure Jonny the Monkey is to be delivered to “No. 1 ladies’ man” Michael Pence – aka “the vice pussy grabber.” Jonny, a well dressed chimp, doesn’t quite make it to America, so Borat rolls with Plan B, which is to offer up his 15-year-old daughter Tutar (relative newcomer Maria Bakalova) as a child bride.

If you’re somehow not familiar with Baron Cohen’s “Borat” schtick, the major growl in his irreverence engine is the punking of everyday people – whom you’d think would see it coming a mile away, but 14 years is a long time and most targets are xenophobic types south of the Mason-Dixon Line where the name “Borat” might suggest cured meat or a cold soup from an enigmatic and heretical religious sect. In a bakery, Borat asks the counterperson to put the inscription “Jews will not replace us,” on a newly purchased confection. Later, at a debutant ball (how did he even get in there?) Borat and his daughter perform something of an Eastern Bloc jig with the daughter’s dress unfurling for a visible jaw dropper among the well-heeled upper crust. Getting closer to his mark, Borat takes the stage at a right wing rally, crashes a Pence speech and dons Klan robes and a Trump costume. The real grabber is Tutar, dressed up and looking eerily like Ivanka Trump, interviewing Rudy Giuliani and ultimately coaxing him into a compromising situation that not only raises eyebrows and questions of ethnics, but likely will fry what’s left of the former New York City mayor’s reputation.

The film was shot during the spring and summer as Covid raged across the country – Giuliani at one point says Trump saved a million lives because the Democrats would never have acted. Throughout the course of the film, use of masks increase and the disease quietly and slowly becomes a key player. The reveals of a divided America hopefully are nothing new to viewers, but the comic reframing is a healthy reminder with the election on tap. The real revelation here is Bakalova as Borat’s daughter, seamless in her audacious pranking. With Baron Cohen there’s always a puckish nod and wink in his eye; with Bakalova, it’s smooth and natural, with nothing contrived. As a result, the darkness of the candid camera moments is deeper and more visceral. “Subsequent Moviefilm” pokes us all in the eyes and exposes us to a new talent.