Movement for ranked-choice voting holds rally in Cambridge, with ranked ballots since 1940 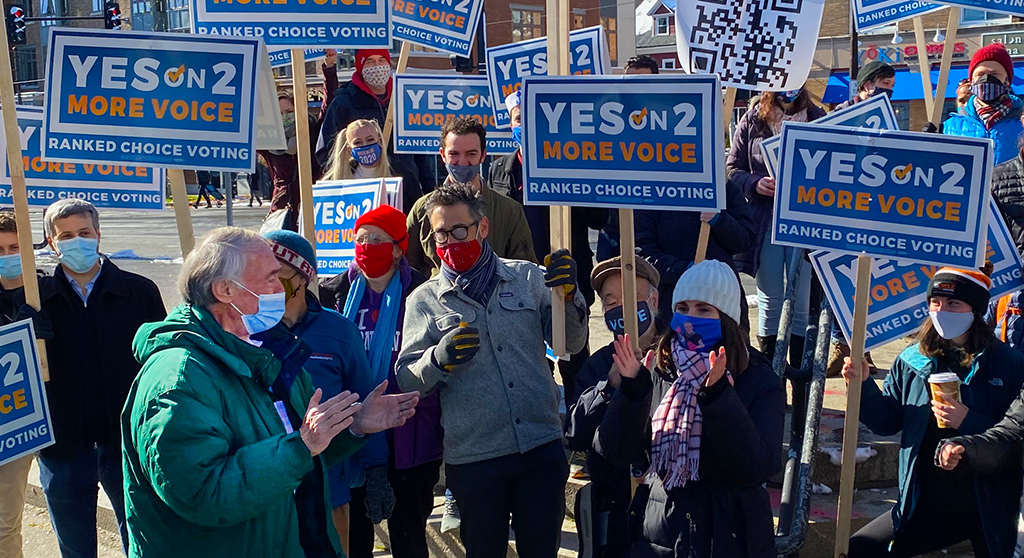 Movement for ranked-choice voting holds rally in Cambridge, with ranked ballots since 1940

The effort to bring ranked-choice voting statewide was in comfortable territory Saturday with a rally in Porter Square, in a city that has been using it since 1940.

The bid to replace all-or-nothing ballots with ones that let voters identify their favorite candidate, second-favorite, third-favorite and so on gets a vote of its own on Tuesday, as Question 2. It would mean that if a voter’s favorite candidate is eliminated during a count, their support moves to be counted for their second-favorite candidate rather than disappearing with their top choice. Backers say it could end the notion of spoiler candidates while allowing people to vote their conscience.

Two leaders of the “Yes on 2” movement, Jesse Mermell and Evan Falchuk, spoke briefly at the small rally alongside U.S. Sen. Ed Markey, who called ranked-choice voting just the latest democratic revolution being led by Massachusetts after the Affordable Care Act, same-sex marriage – and the American Revolution itself.

“Momentum is building. We can feel that it is within our grasp to win this referendum,” Markey said. “We know that we should give voters more choice, we have to give them more power. And the way to do that is to have ranked-choice voting. That way, everyone’s voice can be heard in its largest amplitude, because they do not have to in any way question whether or not their voice will count in the selection of the candidate.”

Ranked-choice voting respects “those with the best ideas” and not just with the most money. “From my perspective, RCV really stands for real common sense – that we give everybody the ability to have their voices heard, and that their perspective, their ideas, can then realign with other candidates that share their views most closely in any election,” Markey said.

Cambridge’s “proportional representation” form of ranked-choice voting has been in place since the city’s adoption in 1940 of the Plan E charter form of government, though last year ballots changed to allow voters to order only 15 candidates instead of however many candidates might be running. (That’s often into the 20s for the nine-seat City Council; in 1941, there were 83 candidates.) Though councillors have begun looking at charter changes, experts assured them last month that no matter what plan was swapped in, the city could keep its ranked choice form of voting.

If Question 2 passes, voters statewide would see the change on their ballot in 2022.