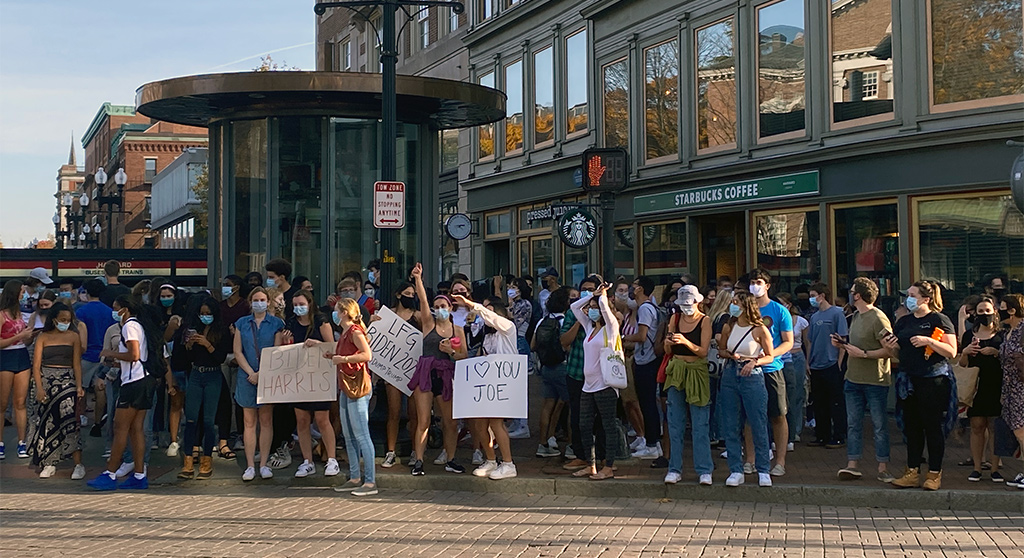 Spontaneous street parties broke out Saturday in Cambridge, as well as around the country and internationally, upon official reports that Joe Biden and Kamala Harris had enough safe electoral college votes to take the White House in January. Though Election Day was four days earlier, coronavirus and other complications slowed the vote count.

The peaceful celebrations in Central and Harvard squares starting at around 2 p.m. drew “several hundred people,” said Jeremy Warnick, director of communications and media relations for Cambridge police, with the gathering at the Harvard Square kiosk and 1400 block of Massachusetts Avenue big enough to affect traffic in the area.

Officers briefly closed the southbound lanes of Massachusetts Avenue at Garden Street and JFK Street northbound at Mount Auburn Street, Warnick said, but police had “no significant issues” to report.

The scene in Harvard Square was almost like a parade, in that celebrators lined the streets around passing traffic. But the cars and bicyclists they cheered merely held people like themselves, cheering back. (Though some waved American flags as they passed.) There was chanting and small patches of dancers in the mostly younger crowd, as seen around the country, and signs – ranging from “I love you, Joe” to “Fuck Donald Trump, seriously.” In Somerville’s Union Square, a trumpeter did a rendition of the national anthem.

Police had little safety concerns in the run-up to the elections, but were “prepared for any potential issues that may arise,” Warnick said. Plans were presented to city officials the previous month. There were no reports of businesses boarding up their storefronts in anticipation of unrest or damage resulting from crowds, as was seen in some other cities nationwide.

The many scenes of joyous celebration, music and dancing spread quickly on social media – along with some concerns about such gatherings spreading coronavirus – and some chose to make their voices heard online too. Local leaders were among them.

“During the past four years, my hope and confidence in our country and the direction we were heading in was tested, but they never wavered. I knew we would choose opportunity, love and justice. I knew we could come together to fight for what is right,” Mayor Sumbul Siddiqui said via Twitter, referring to the election of Biden and Harris. “It feels like we’ve been screaming for four years, and today’s outcome is like we were finally heard.”