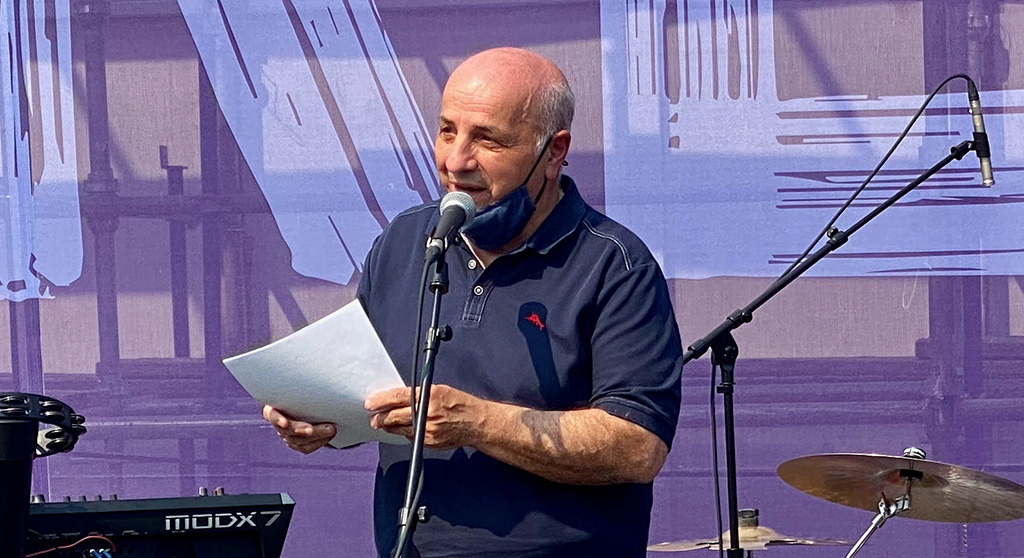 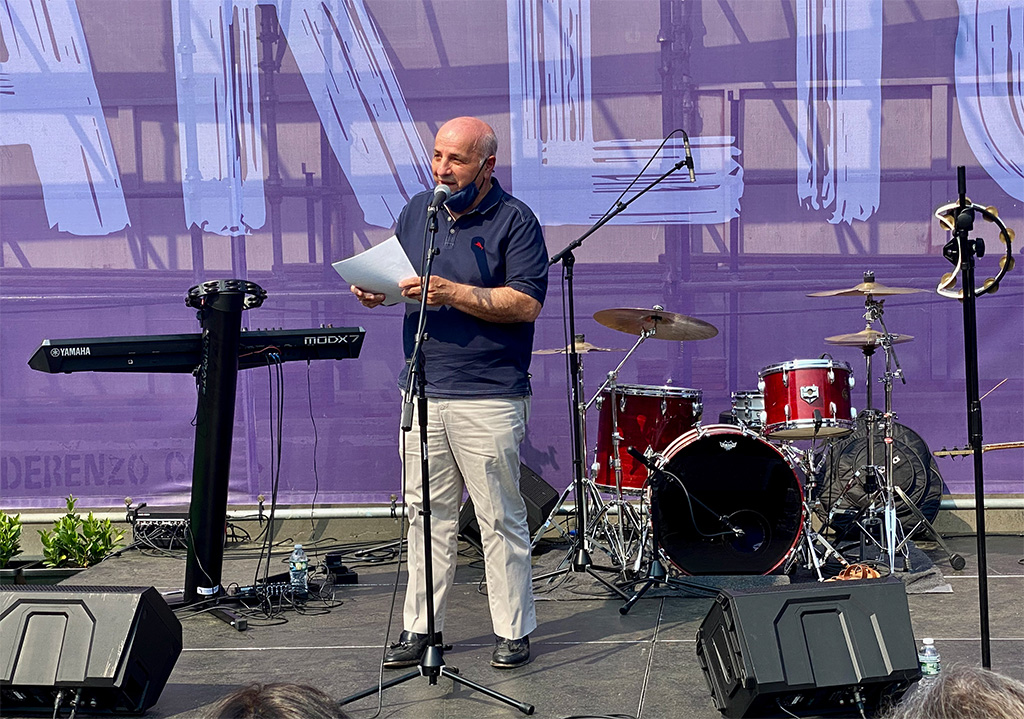 City Manager Louis A. DePasquale during a speech at Starlight Square in May, as Covid cases were easing. (Photo: Marc Levy)

In response to the continuing high demand for testing, the city will probably put a fifth testing site in the Central Square area, City Manager Louis A. DePasquale said. Cambridge’s free testing program administered 10,000 tests in August, the highest number since April, and about 1,000 people get tested for Covid during each four-hour testing session. The city now offers testing Sundays in Harvard Square; Mondays and Thursdays at the CambridgeSide mall; and Wednesdays at St. John the Evangelist Church, 2254 Massachusetts Ave., North Cambridge.

The updates on Covid-19 came as the City Council returned from its summer recess. Councillors had previously pressed DePasquale to impose a vaccination mandate for city employees, voting to ask him what the administration was doing to adopt one. Now, after the federal government, Massachusetts, Boston and Somerville, the Cambridge school department and two local public agencies – the Cambridge Housing Authority and Cambridge Health Alliance – have moved to mandate vaccinations for their workers, councillors continued the pressure.

“I’m on the record: The council wants 100 percent staff vaccination, whether it is a mandate or any other way,” councillor Patty Nolan declared.

DePasquale pushed back, implying that the other government authorities had not imposed a real mandate. “Nobody has put a vaccine mandate in anywhere,” he said, describing a program that if “someone chooses not to be vaccinated, they need to be fired. We have checked with every city, and that is not what is in place.”

He called it “an incredible and complicated topic” from a “legal, human resources and logistical perspective” but said the city was making progress and beginning to talk to unions.

Still, it wasn’t clear what was being discussed.

Vice mayor Alanna Mallon pushed forward, saying, “The No. 1 question people ask me, what are we doing about a vaccination mandate for city employees?” and DePasquale launched into a long explanation including that the city is “looking into a vaccine program that would not mandate the employees to get vaccinated, but mandate they get tested.”

City spokesman Lee Gianetti was asked for clarification and did not immediately respond. Most employee vaccination requirements include an option for employees who won’t get vaccinated to keep their jobs if they get tested at regular intervals.

Looking for a decline

Meanwhile, the city will continue to impose enhanced Covid-19 precautions such as requiring masks indoors in public settings until health officials see “a sustained – I think the key word here is ‘sustained’ – decline in the numbers,” acting chief public health officer Susan Breen said. “We haven’t had that. We have been going up.”

Breen said some of the breakthrough Covid cases – those in fully vaccinated residents – are in clusters. As more people get vaccinated, there are more breakthrough cases, Dobberteen said, echoing experts. She blamed the coronavirus delta variant, which is much more transmissible than the original virus.

“We are seeing delta variant breakthrough cases [even in] people who have been fairly careful,” Doberteen said. But 99 percent of serious disease that leads to hospitalization and death is in the unvaccinated, she said.

Breen, former head of school nurses and a Cambridge Public Health Department employee for 27 years – half of that time in the communicable diseases program – came out of retirement to fill in after chief public health officer Claude Jacob left in July.

While Covid cases have been rising, the number of residents getting fully vaccinated has stayed at 68 percent. It even declined one percentage point, to 68 percent last week from 69 percent, after the state health department eliminated duplicate vaccination records, the city said.

Breen said the health department had made progress vaccinating older teens – those from 16 to 19 years old – who lag behind other age groups. She said 55 percent of those older teens are now fully vaccinated, up from a 48 percent figure lasting stubbornly for weeks before. But the latest city vaccination report, on Sept. 9, said the figure for fully vaccinated residents 16 to 19 was 47 percent. A health department spokesperson couldn’t immediately be reached.

At Cambridge Rindge and Latin School, the city’s public high school, the “unofficial number” of students fully vaccinated is only 44 percent, Dobberteen said.

Nolan, who sat on the School Committee until 2019, called the number “shockingly low.”

Dobberteen pointed out that unlike the more-vaccinated cohort of younger teens, older teens aren’t brought to vaccination clinics by their parents. “That is the group that wears the seat belt less often and engages in risky behaviors more often,” she said.

The health department will offer vaccination clinics at the high school, she said.

The department has also scheduled influenza vaccination sessions at homeless shelters, public housing for seniors and meals programs in October and will run large public flu vaccination programs, Breen said. The city agency has also told state health officials it is interested in providing Covid booster shots to residents if they are approved by the federal government.