Generation X cynicism a gift from boomers we can pass down 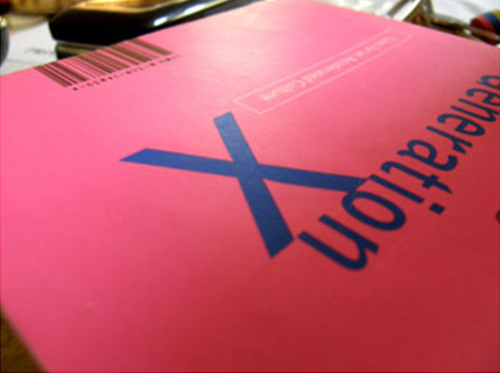 Generation X cynicism a gift from boomers we can pass down

There’s been much to write about Generation X, so much of it grim or at least cynical. With good reason. (Photo: Annie in Beziers via Flickr)

Awful as it feels to be a stereotype, a demographic, a predictable part of a psychohistoric trend, there are a few ways in which I conform reluctantly to exactly what’s expected of me. I like just enough stuff from among all the Stuff White People Like to be convinced I’m white; sometimes it’s all too clear I’m a straight male; and there are ways I couldn’t be — ugh — more Generation X.

My Xness stands in contrast with the boomers who raised me. Mom was, for much of my life, a homemaker; dad was a workaholic in aerospace. And each had a spouse (each other) and three kids (including me), for a perfectly imperfect nuclear family. Together they went from 1950s traditional to a wee bit hippie to a wee bit swingy to a wee bit conservative and then, in that other bandwagon of the 1980s, totally downsized.

And, like so many other Generation Xers that it became the topic of studies, polls and earnest treatises about “Managing Generation X,” the downsizing of my father’s job and 43 million others between 1979 and 1995 had a huge impact on me. Because we grew up seeing our parents’ hard work and loyalty be rewarded with the betrayal of layoffs just as executive salaries began to hit the levels of truly obscene, sometimes just because a chief executive had been bold enough to lay everyone off, we Xers knew loyalty to a company was a fool’s game. It didn’t help that the love story of our age was “Pretty Woman,” in which a beautiful prostitute gains the perfect life by ways of immense wealth with a man who typifies the business ethic of the 1980s: He buys up companies, breaks them into pieces and sells off the pieces — as the prostitute says, “you don’t make anything and you don’t build anything … it’s sort of like stealing cars and selling them for the parts” — regardless of the effect on the people working at those companies.

True, everything works out delightfully for Julia Roberts’ improbable hooker and Richard Gere’s uncommonly conflicted tycoon, but we Xers were raised to be masters of cynicism, and we knew what we were seeing was Hollywood at its finest-slash-worst, something for us to enjoy before getting back to our ramen and McJobs. As usual, Hollywood was obsessed with wealth as entertainment for people who didn’t have it.

Our other great entertainment was hearing how we were flustering the boomers who retained their jobs — our bosses. As Joann Muller wrote in The Boston Globe back in 1996,

“Boomer bosses, born between 1946 and 1964, complain that workers in their 20s and at the beginning of the 30s have short attention spans and lack a strong work ethic or that they are rude, greedy and impatient.”

To which we would reply with a line from another classic movie of our era, 1985’s “The Breakfast Club”: “No, dad, what about you?” Of course we acted this way! We’d be idiots to act any other way for the people who were about to lay us off no matter how hard we worked. Patience and politeness were fools’ games. Lesson learned.

Speaking as a member of my cynical, disloyal generation — one shaped, of course, by our parents’ generation — it’s hardly surprising we’re seeing more of our country’s implied promises (the kind you take to heart in elementary school before learning how things really work) taken away. Of course the richest among us are stripping the protections of Social Security and Medicare, just as they cast off 43 million jobs for starters with the assurance we’d ultimately be building a stronger, more competitive America.

During the exact period those jobs were disappearing, or being shipped overseas, we saw America’s rate of children in poverty rise by 37 percent, the highest in the developed world, as Ted Halstead noted in The Atlantic in 1999. And even as we graduated from college and entered the work force between 1989-95, our earnings fell by nearly 10 percent. We were earning less than our parents had, although things cost more and we had more debt.

Plenty of the politicians screwing America this time around are Gen Xers, of course, who learned disloyalty, saw the poverty, got mixed messages about wealth from “Pretty Woman” and were told to look up to our president, Ronald Reagan, a genial but elitist idiot with merciless and shortsighted policies for whom ignorant affection has metastasized into a cult.

One can only imagine what the generation growing up now is learning from all this, but my fear is that “disloyal,” “cynical” and “selfish” aren’t going to even begin to describe how they’re learning to behave in coping with the world we’re leaving them.