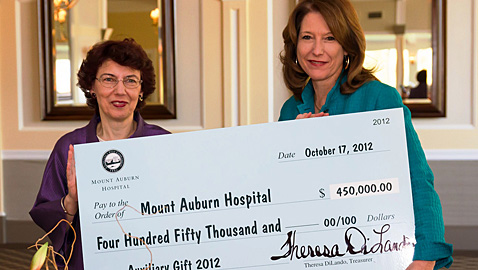 Donna Smerlas, president of the Mount Auburn Hospital Auxiliary, presents the group’s fundraising so far this year to Jeanette Clough, president and chief executive of the hospital.

With two big months left to go in the year, the Mount Auburn Hospital Auxiliary has handed over its 2012 fundraising haul so far to hospital president and chief executive Jeanette Clough: $450,000.

The auxiliary makes its money several ways, including gift shop sales, raffles and events throughout the year, including an annual Tree Lighting Ceremony and Spring Luncheon and Fashion Show, said Jen Garfinkel, a publicist for the 126-year-old, Harvard-affiliated hospital.

The luncheon and fashion show are done for the year, and the group’s Holiday Showcase gift sale was Monday and Tuesday in the lobby of the hospital, 330 Mount Auburn St., west of Harvard Square. Holiday items such as decorations, stocking stuffers, hostess and teacher gifts, jewelry, general gifts and clothing for children and adults were available.

But the ninth annual Tree Lighting Ceremony is scheduled for 5 p.m. Dec. 5, with tree lights selling for $10.

“Each light on the tree represents gifts made by donors in honor or memory of loved ones. More than 300 donors contribute over $10,000 yearly in support for Mount Auburn Hospital,” said Donna Smerlas, president of the group.

The fundraising so far was given to Clough in conjunction with the auxiliary’s annual meeting, Garfinkel said. Last year’s sum, announced after the turn of the year in January, was a record-setting $500,000.

Clough, after accepting what was in every sense of the term a giant check, called the auxiliary “unsung heroes” in support of fundraising initiatives helping the hospital.