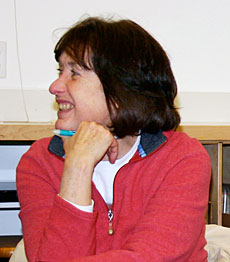 Karen M. Klinger, late of Cambridge, died Dec. 16, 2012. She is survived by her sister, Elizabeth K. Barrow, her brother-in-law, Edward M. Barrow, her niece, Heather B. Barrow, and her nephew, Christopher T. Barrow. Karen received her B.A. from the University of Pennsylvania and her M.A. from Stanford University. She pursued a career in journalism, specializing in the sciences, with the San Jose Mercury News. She traveled widely, including treks in Africa and the Himalayas. Karen moved from the West Coast and settled in Cambridge when she became a Vannevar Bush fellow at the Massachusetts Institute of Technology Her work in journalism expanded to include local political coverage in print and video media. She was the co-recipient of the 2012 Hometown Media Award for her work with Cambridge Community Television. Contributions in her name can be made to CCTV, 438 Massachusetts Ave., Cambridge, MA 02139.

A remembrance of Karen Klinger by her friend Susan Hunziker is here.