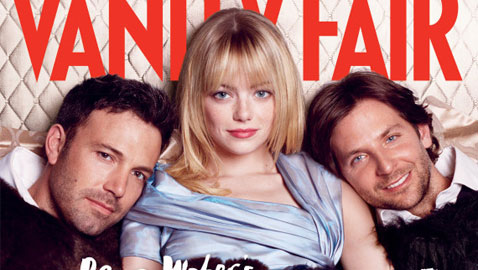 Ben Affleck: The elder Affleck and his “Argo” is up for a Directors Guild of America award tonight after a three-day sweep of the Santa Barbara International Film Festival and Producers Guild of America  and Screen Actors Guild awards a week ago. “Argo” is even huge with moviegoers in Iran, despite the government complaining about being made the movie’s bad guy, according to The Wall Street Journal. (See why in the video above.)

Since success breeds success, it’s no mystery people are trying to draft Affleck even for projects to which he’s said no or already been passed over. Here’s a petition to get Affleck to run for John Kerry’s seat in the U.S. Senate. And here’s Ross Douthat in The New York Times writing about why the next “Star Wars” movie should have gone to Affleck instead of J.J. Abrams:

Affleck has now made not one but three movies that are better works of pulpy entertainment than anything J.J. Abrams has ever directed. And where the challenge of rescuing “Star Wars” is concerned, actual filmmaking talent might matter more than previous experience with spaceships and monsters. … fans of the original “Star Wars” trilogy should realize that the director of the next installment faces a bigger challenge than just serving as a capable custodian of a popular franchise, or enlivening a stale formula with some lens flares and sex appeal … I’ve been disappointed by enough J.J. Abrams productions already, and I wish that Disney had just chosen the more talented filmmaker, and gambled that his talents would translate to a galaxy far, far away.

Further, here’s Access Hollywood on the “charmed path” Affleck and “Argo” are taking toward Oscars night, which calls the movie “a big wet kiss, a crowd-pleaser that works at every level,” and likely to become just the fourth film to win best picture without a directing nomination.

Other Affleck items: He picked up a Persian rug for $2,500 after the Turkish seller told him, “The blood of 10,000 kings is on this carpet … Your wife will love you”; he wants Daniel Day-Lewis to star in “Live By Night,” his next Dennis Lehane adaptation; he would do “would do whatever I could to discourage” his kids from working in Hollywood; he apparently raced Justin Timberlake in high heels on the set of “Runner, Runner” just, well, just because; and he’s on the cover of Vanity Fair in a bear suit, with Bradley Cooper in a gorilla suit, with Emma Stone between them. Us Weekly quotes the magazine’s explanation for the scene: “It is the house where Robert Duvall, the consigliere to the Corleone family, arranges to have the recalcitrant movie producer who lives there wake up with his prize horse’s head in his bed.” Oh. 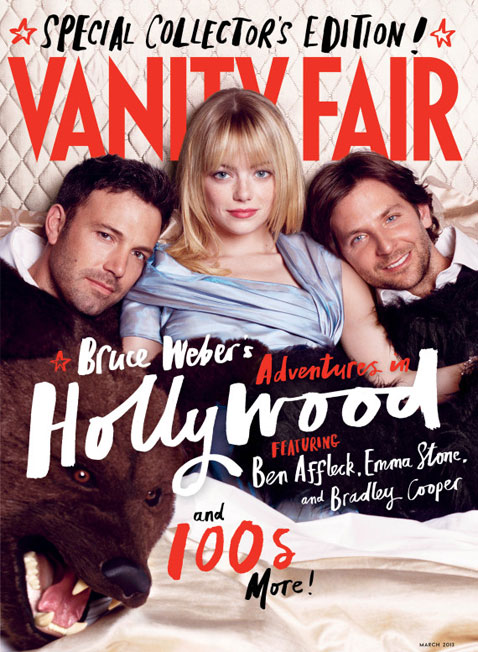 Meanwhile, here’s the younger Affleck on “Argo” winning for Best Picture at the Oscars: “It’s a lock. I don’t think [Ben] can be stopped. It’s a great movie, he did a great job directing it, and there’s a lot of good will for him,” he said in The Boston Globe. “Really, why shouldn’t he win?”

And on animal rights: Affleck sent a letter Tuesday to the State House seeking a bill protecting the rights of farm animals. “For a long time our legal system has attempted to protect only pets from pain and suffering, not farm animals,” he wrote, quoted in Bostinno, asking for a bill closing “this gap in legal protection.”

Traci Bingham: First you have the stereotype of a man buying flowers for his special lady friend on Valentine’s Day, as well as the stereotype of the jealous special lady friend being given flowers to make up for the hapless man making her jealous somehow. Thus bloom a million comic strips dating back to the early years of the 20th century. Exotic Flowers, 609 American Legion Highway, Roslindale, is seeing if it can make those stereotypes come to life from 2 to 4 p.m., when it has “Baywatch” and Playboy star Bingham scheduled for a “meet and greet, autographs, fan photos and even [to] assist clients in helping select the perfect flowers.” (Shorter version: To express your love, go buy flowers from a “Baywatch” babe.)

Matt Damon: It sounds like the set of Steven Soderbergh’s “Behind the Candelabra” was fun. In the Liberace biopic, Matt Damon kisses Michael Douglas, who’s married to Catherine Zeta-Jones (who’s just about to release her own Soderbergh film, “Side Effects”). Zeta-Jones told Access Hollywood – are you still following this? – that Douglas told her that Damon told him that when he kissed him, he was thinking of Zeta-Jones.

It’s probably more clear if Zeta-Jones says it for herself: “Matt actually said to my husband that when he had to kiss Michael, he’d close his eyes and pretend he’s actually kissing me, which I thought to be extremely flattering,” she told AccessHollywood’s Laura Saltman.

“If my husband”s going to kiss anybody, let it be Matt Damon,” she told Ellen DeGeneres.

John Malkovich: Actor Dave Franco (brother of James – sorry to do that to you, Dave) has some good things to say about the Malkovich from the set of the zombie romance-comedy, “Warm Bodies.” From Zimbio:

It was pretty awesome just to be around Malkovich. I mean, at first, when you’re in a room with him it’s kind of intimidating. He’s John Malkovich and you kind of have these ideas about him based on characters that he’s played, but then when you’re in front of him, he’s a goofy guy. He’ll spontaneously, like, I remember him rapping one day, just throwing out Dr. Dre lines. He’s just this fascinating guy more so than you’d think. Like, I didn’t know he was an opera singer. He has his own clothing line.

“Warm Bodies” is 77 percent fresh on Rotten Tomatoes (the audience thinks it’s 80 percent fresh) in its first week in theaters, while Metacritic is giving it a 59 out of 100 based on 32 reviews. With lukewarm reviews shambling in, Rolling Stone is among those saying Malkovich has recently been in “paycheck mode” – and that may be true in film, although Malkovich continues to do far edgier, challenging material as a stage actor and director.

Sam Waterston: Waterston was inducted Monday into the Theater Hall of Fame alongside such theater folk as Betty Buckley, Christopher Durang and Trevor Nunn. His bio, given briefly by Backstage: “Waterston, while most widely known for his television role on ‘Law & Order,’ has appeared in many Broadway shows. In 1994, he was nominated for a Tony Award for his performance in ‘Abe Lincoln in Illinois.’”