Essay: How MIT’s doing it wrong in Kendall Square 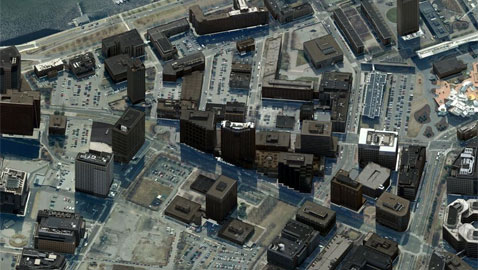 Essay: How MIT’s doing it wrong in Kendall Square

In spite of a severe Cambridge housing crisis, the Massachusetts Institute of Technology plans to build on-campus towers for lease to commercial tenants.

Under a zoning petition before the City Council’s Ordinance Committee, the university is seeking permission to upzone 26 acres south of Main Street, east of Ames Street and north of Memorial Drive. Officially known as the PUD-5 District, this represents a substantial portion of MIT’s East Campus by Kendall Square.

To be fair, the petition is praiseworthy for its contemporary approach to urban renewal. It calls for high-density, mixed-use, transit-oriented development complete with interconnected open spaces, LEED Gold building standards and a streetscape conducive to bike and pedestrian traffic.

Nevertheless, the petition remains deeply flawed because it skews far too heavily in favor of commercial real estate development while ignoring the institute’s pressing need for graduate student housing.

At its core, the project seeks to redefine the East Campus with a gateway of corporate towers – some likely rising 300 feet. At a committee hearing last week, councillor Minka vanBeuzekom noted that the proposal represents “a complete blurring of what’s academic and what’s commercial.”

Of course, Kendall Square has one of the hottest commercial real estate markets in the country, and commercial real estate development is far more lucrative than residential development. From a purely financial perspective, upzoning makes sense. What remains unclear, however, is whether the institute’s quest for rental income is compromising its broader academic mission.

The focus on profit seems to be exacerbated by the fact that MIT does not have a typical campus planning committee with faculty and student participation. Instead, its decision is apparently being driven by Steve Marsh, the real estate director of the institute’s Investment Management Corp. Marsh takes home nearly $700,000 annually, plus bonuses based on financial returns.

No relief for grad students

Longtime Cambridge activist James Williamson sums up the situation in simple terms: “It’s money versus people.” And without a doubt, the people who are affected the most are the institute’s graduate students and postdoctoral fellows.

Currently, MIT is unable to offer housing to approximately 4,000 of its 6,500 graduate students, according to Nathaniel Schafheimer, co-chairman of the Graduate Student Council’s Housing and Community Affairs Committee.  (Figures from last year’s Town Gown Report Summary are different.)

About 2,400 of these students end up renting market-rate apartments in the city. Given our extremely tight rental housing market, it’s no wonder most of these folks say they are “very dissatisfied” with the cost of housing. Last year alone, off-campus rents for MIT graduate students jumped by 8 percent. 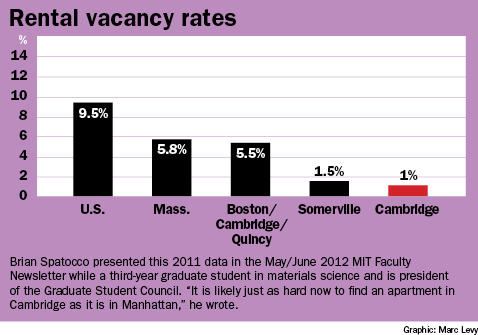 Schafheimer put these numbers into perspective at last week’s committee hearing. “Rent makes up nearly half of our pretax income, so when rents off-campus are rising at this extremely high rate, stipends can’t follow at the same rate, and students’ purchasing power and standards of living are decreased,” he said.

Part of the reason: citywide vacancy rates are at an all time low. In the Central Square neighborhoods closest to campus, vacancies hover around 1 percent. “That’s Manhattan-level demand,” Schafheimer elaborated.

If the graduate students were just your average young professionals, they might be able to relocate to some less expensive community – Watertown or East Boston, for instance – and spend a couple of hours per day commuting.

The problem is that doing world-class scientific research is not a 9-to-5 job. “Living near campus is not a luxury,” Schafheimer said. “Many scientists need to be near the lab at all hours to check on experiments, and those who don’t still need interdisciplinary time with their peers. For many types of research, the power of proximity is vital.”

“MIT’s graduate students are the human engine that drives research and development activity,” said Jonathan King, a professor of molecular biology who – despite his deep ties to the institution – is outspoken in his opposition to the plan. “The reason the high-tech industry wants to come to Cambridge is because of these graduate students, not because of these commercial buildings being built on the campus.”

A lost opportunity on housing

With its emphasis on commercial development, not only does the MIT proposal fail to address the needs of graduate students; it deprives the people of Cambridge of a unique chance to alleviate some of the pressure imposed by our terribly overheated rental housing market.

That’s because the 2,400 institute graduate students who rent in Cambridge tend to occupy some of our more modestly priced apartments. If the university offered additional housing to this group, these apartments would become available to the general population of Cambridge.

The importance cannot be underestimated. It represents a once-in-a-lifetime opportunity for our city to effectively recover a large stock of not-so-expensive rental housing. For a rough comparison, consider that in the entire 15-year history of the city’s inclusionary zoning program, only some 450 units of affordable housing have been created. Again, that’s not a perfect comparison, but it speaks to the scale of the opportunity that lies dormant in these plans.

Despite the lack of graduate student housing, supporters of the MIT plan have been quick to tout the “strong housing component” in the current proposal.

In the context of our citywide housing crisis, that seems like a stretch.

Granted, the proposal does call for at least 240,000 square feet of new housing; the institute figures this will yield up to 300 units.

But these units will be largely inaccessible to graduate students, with 80 percent of the new housing looking extremely expensive (think 25th-floor views overlooking the Charles River). With a torrent of additional corporate development already in the pipeline for Kendall Square, it’s doubtful this housing will have any perceptible impact on our city’s exorbitant rental prices.

Advisers in, advice out 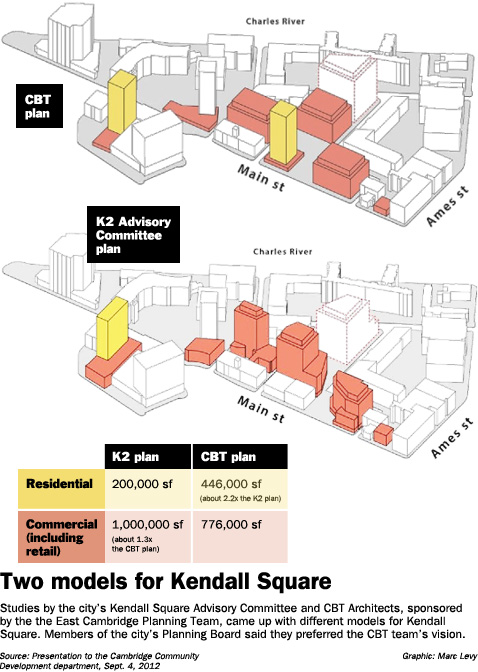 Another common argument in support of the plan: “It’s consistent with the recommendations of the Kendall Square Advisory Committee.”

This may be true – but it’s hardly a surprise.

One year into the public planning process for the proposal, City Manager Robert W. Healy selected members for a newly commissioned Kendall Square Advisory Committee (aka “the K2 Study”).

Unfortunately, the committee was stacked in favor of major real estate developers. Forest City, Boston Properties, Alexandria, Twining Properties, and MITIMCo were individually represented, and even Joseph Tulimieri, the chief of the Cambridge Redevelopment Authority asked to resign for potential finance improprieties, was given a seat at the table. Meetings were typically held between 8 and 10 a.m. on weekdays, and formal minutes were never recorded.

In the end, the committee placed a heavy emphasis on commercial real estate development. But is that any wonder? For most of these big developers, new corporate space is the real pay dirt. On a committee dominated by so many powerful interests, actual neighborhood leaders such as Barbara Broussard were left complaining that their voices weren’t being heard.

Fortunately, the East Cambridge Planning Team, a respected neighborhood group with a track record of working in concert with developers, took the unusual step of commissioning its own study. The results – produced by Boston’s CBT Architects – were truly impressive. Noting a “land use imbalance” with too much focus on commercial office and laboratory space, the independent study called for 446,000 square feet of new residential space, more than double the amount of residential space than was recommended in the city’s K2 Study.

When city officials presented both visions to the Cambridge Planning Board in September, several members said they preferred the independent CBT study to the city’s own.

Yet the council is just weeks away from rewriting the zoning code to open the door for on-campus commercial towers.

At last week’s hearing, Ordinance Committee chairman David Maher said he planned to schedule two more meetings in February to review the MIT petition. The Planning Board is expected to complete its work around the same time. The proposal will likely be voted on by the full council, probably sometime in March.

In response to growing faculty dissent and student concerns, MIT Provost Chris Kaiser has commissioned an 18-month task force to look at the issue of graduate student housing.

King remains skeptical: “If they want to do a year-and-a-half study, then it should be the other way around. The proposal should be amended to include graduate student housing, and the study can tell us if commercial real estate development makes sense.”

Given the fact that the graduate students have been clamoring for additional on-campus housing for more than 10 years, King seems to have a point.

In the final analysis, beyond all the excitement surrounding Kendall Square’s revitalization and beneath all the hype over bike sharing, tech incubators and the pastel renderings of tree-specked canyons of glass and steel, the issue of student housing really boils down to “money versus people.”

The question now is whether the MIT community and people of Cambridge can decide upon something better.

People wishing to oppose the plan and encourage the construction of more graduate student housing are invited to sign this petition.

The graphic comparing proposed commercial and residential development was updated Feb. 4, 2013, to correct what had been reversed color codes and maps.