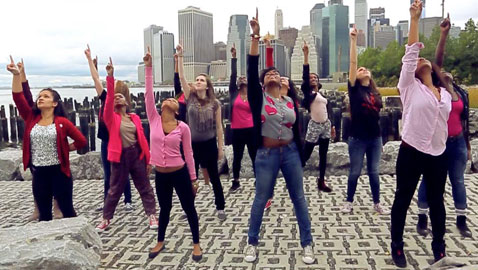 You’ve been invited to a flashmob.

One Billion Rising Cambridge – part of the V-Day campaign to end violence against women and girls – is hoping people come at 2:45 p.m. Thursday to Joan Lorenz Park at the Cambridge Main Library, 449 Broadway, “to rise up against violence with dance, music and an open mic.”

Thursday, of course, is Valentine’s Day, and organizers say red, pink and black attire is encouraged at the free event.

“We want everyone who possibly can to leave their classrooms, workplaces and homes for a little while to join in solidarity with people everywhere who are saying ‘no more’ to violence and abuse and actively seeking alternatives,” said Risa Mednick, executive director of Transition House, a domestic violence prevention and services agency and one of the coordinating groups.

The event has a Facebook page and Twitterfeed at @1BillionCambMA, and One Billion Rising has its own website.

“The intention is to send a  peaceful and creative message that we have to interrupt business as usual to recognize the inescapable violence that has become so normal in our society and around the globe,” said Dr. Barbara Hamm, director of the Victims of Violence Program at Cambridge Health Alliance, a coordinating partner.

The local One Billion Rising and the Thursday event is a collaboration of The Cambridge Commission on the Status of Women, the Mayor’s Office, the Victims of Violence Program at Cambridge Health Alliance, Rozann Kraus, Transition House, Students of the Cambridge Rindge & Latin Modern Dance Co., Sisters on the Runway-CRLS, Deborah Mason School of Dance and Violence Transformed.