‘Oblivion’: Where the clichés go when Earth dies 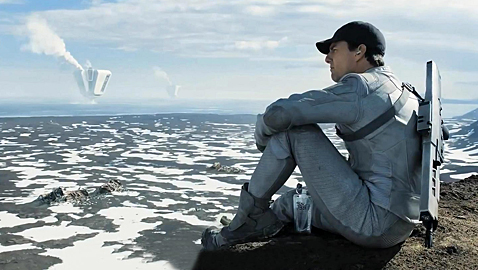 ‘Oblivion’: Where the clichés go when Earth dies

It’s some 70 years in the future and Earth is a wasteland, barren and plucked clean by nukes. Nukes mind you that weren’t unleashed on man by fellow man, but man nuking invading aliens who, during their incursion, blasted the moon in half, throwing off the tides and setting off tsunamis and earthquakes that accelerated Earth’s demise to a radioactive and near uninhabitable state. So the final vestige of mankind, which lives above the planet on an inverted-pyramid-shaped monolith/spaceship, waits as turbines on Earth siphon off seawater and convert it to stored energy so they can jet off to a distant moon where a new Eden awaits.

All that’s the “A long time ago in a galaxy far, far away” preamble before we get to Herr Cruise. And the movie, in case you were wondering, is all about Tom Cruise. As one of the only two people remaining on the surface of the planet, there’s plenty of Tom time. Cruise plays Jack Harper (not to be confused with Jack Reacher, Cruise’s last role), a one-man militia and maintenance crew who keeps the turbines chugging and, with the aid of a smattering of drones, keeps the remaining aliens, embedded in caves and subterranean mazes of ruined stadiums, at bay. Jack’s partner Victoria, (U.K. actress Andrea Riseborough) helms the control console and reports up to command while Jack dashes about in his ornithopter (stealing that term from “Dune” because it’s applicable – more on that later) and tends to the drones and turbines.

Jack and Victoria are stationed at a sleek Art Deco sky loft perched atop a nifty tendril structure just above the cumulous blanket. Think of an iPhone on a feathery pillow of pulled cotton and you’d have the right idea – killer pads in Midtown aren’t this hip and minimalist. The two have plenty of sex and look fetching skinny dipping in the glass-bottom infinity pool, but there’s not much connection; their memories have been erased and all they have to do is to focus on their mission, each other and the notion that they will ascend to the mother ship in two weeks and be on their way to a new world. 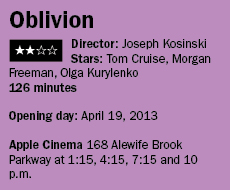 But then one of the drones and a turbine get sabotaged; there’s a strange signal out near the radioactive zone and Jack starts asking questions.

To say any more about the plot would be to do the film, and potential goers, a disservice, so I’ll cease.

The screening of “Oblivion” I attended was in IMAX format, and I can’t stress enough that this is the only way to see it. The film, directed by Joseph Kosinski, is a scrumptious feast visually and the whizzing drones, zapping lasers and booming explosions take on a role of their own in the surround sound.

Everything builds nicely initially, engrossing and fashioning a riddle about what our tomorrow might look like. But as it goes, there is something deeply unsettling. Aren’t those drones, an amalgam of Huey, Louie and Dewy from “Silent Running” and the bad-ass blaster ’bot in “Robocop?” How many times does Jack, roaming about in the desert perforated by the fractured remains of landmark bridges and towers, evoke memories of Luke in the first “Star Wars” (1977) or even Charlton Heston in “Planet of the Apes”? Oh, and then there’s the ominous computerized voice that calls all the shots from behind the protective curtain of wires. Hal or Mother from “2001” or “Alien” anyone?

Those are just a few of the many egregious pilfers in what turns out to be a sci-fi flick mashup. Even “An Affair to Remember” gets sucked up and regurgitated.

Once you start to realize the patchwork, and Tom Cruise too, begins to seem like a retread of everything he’s done before (save “Born on the Fourth of July” and “Magnolia”), Kosinski’s opulence begins to lose it ability to impress and becomes little more than gunpowder burns and saccharine excess.

Perhaps the most interesting aspect to “Oblivion” is its use of drones as a police force. The debate in the here and now about using them to strike terrorist cells abroad and the potential to use them for law enforcement here might use it as good food for thought. Other than that, you get a bunch of Cruise and a logic-challenged reveal in the denouement. Morgan Freeman adds some grace as the gruff old voice of reason, and Riseborough and Olga Kurylenko (”To the Wonder”), as a figment of Jack’s fractured memory and more, make the most of their thin roles.

Kosinski, who made “Tron: Legacy” and adapted “Oblivion” from his own graphic novel, has plenty of elan and an active, if not original, imagination. He’s Quentin Tarantino sans the snappy dialogue, nonlinear narrative and knack for the cool. Perhaps Kosinski needs to hunker down with a veteran scribe and a cantankerous producer, maybe even change up the genre, and let the pieces fall where they may. Then we’ll know if he’s a caretaker of cliché or a budding auteur.