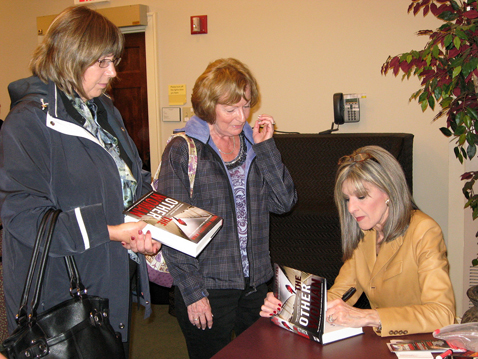 Boston reporter and award-winning author Hank Phillippi Ryan comes to the Cambridge Main Library next week to talk about her thriller “The Other Woman” – another in the series in which investigative reporter Jane Ryland delves into political intrigue and murder – as well as her new series (starting with “The Wrong Girl,” a Ryland novel that is Ryan’s second hardcover), her time as an Emmy-award-winning television report and her midlife career change.

Accompanying Ryan at the event are fellow suspense writers William Landay, of Newton, an eight-year Middlesex County assistant district attorney who became author of such novels as The New York Times best-seller “Defending Jacob,” and New Jersey’s Jenny Milchman, author of “Cover of Snow” and founder of Take Your Child to a Bookstore Day.

The event takes place at 6:30 p.m. June 11 in the main lecture hall of the Cambridge Main Library, 449 Broadway.