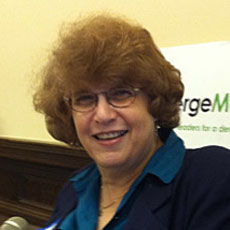 Phillips serves as a commissioner on the Cambridge GLBT Commission and last year ran for the 25th Middlesex State Representative seat vacated when state Rep. Alice Wolf retired. She was a delegate to the 2012 Democratic National Convention, having long been active in the Democratic Party statewide and in Cambridge – as an elected district representative from the Middlesex & Suffolk Senate District and as longtime Cambridge Democratic Ward Committee chairwoman in Ward 6.

She is married and lives in Mid-Cambridge.

Phillips on the issues