‘All is Lost’: Redford, alone at sea, silent, carries film soaked with beauty and fear 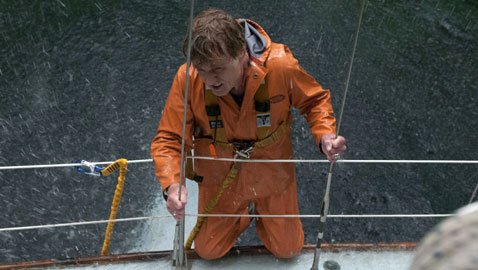 ‘All is Lost’: Redford, alone at sea, silent, carries film soaked with beauty and fear

Vastness can be an aesthetic wonderment, breathtaking to behold like the dark cold of outer space in “Gravity” or the endless desert in “Lawrence of Arabia,” but given a rip in a suit or a missed rendezvous at an oasis, that hypnotic intoxication with the serene forever can quickly become the edge of a hapless demise where outside intervention becomes a mathematic improbability and personal perseverance is the only shot at salvation. 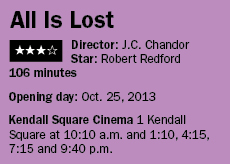 In his sophomore effort, “All is Lost,” young filmmaker J.C. Chandor – who got an Academy Award nomination for his bold debut “Margin Call” – employs the sea as his beauteous hell. The film’s title is a shard from a letter written by a hopeless yachtsman adrift at sea in a life raft.

No, this is not the second coming of “The Life of Pi.” “All is Lost” is not that existential, though the lone character, who has no name (the credits list him as “Our Man”) does go through an existential crisis of sorts. He also endures a series of Jobian trials that would force most people to just cash in their chips and go swimming with the sharks.

The imperiled seaman is played by none other than Robert Redford, who, well into his later years, has the handsome, grizzled look of someone who has been at sea for some time. Not a salty old tar, mind you, but the preppy, pleasure-cruising version of Hemingway’s “Old Man,” dressed in ruggedly effete cable-knit sweaters and Bermuda accoutrements.

When we first catch up with Our Man penning his letter, we get just a tang of his hopelessness and sense of imminent demise before we jump back eight days. Our Man is now resting comfortably in a well-stocked 39-foot yacht somewhere in the Indian Sea, but the tranquil moment is ephemeral. A sudden disturbance rocks his boat violently from the side – the way Bruce, the pet-named shark in “Jaws,” did to fatally weaken the Orca. Examination atop reveals that a shipping container from a passing cargo ship has fallen off and ruptured his hull, and, even without the divine intervention of a foaming mad Robert Shaw wielding a baseball bat, has trashed his communication systems too.

So there he is, marooned on the high seas. We don’t know much about Our Man. We don’t know if solo cruises in exotic and far-flung places is something he does on a regular basis, or who exactly might be waiting for his letter back home. What we do know is that he’s confident, calm and methodical as he takes to mending the ship’s hull. He’s no MacGyver, per se; there’s no presto-magico invention to save the day, just slow knuckle-breaking work and hopeful, trial-and-error validation.

The repair turns out to be a mere stay of execution, as tempests and other extreme maladies close in to beset Our Man. Redford’s understated and nuanced performance, along with Chandor’s simple yet embraced rendering of the open ocean both as celestial body and chalice of death, fill the film’s sails with wonderment and purpose. There’s nothing else, and both players are on their game. In each ensuing “it can’t get any worse” (and it does) scenario, you can always see in the corner of Redford’s eye a trace of fear. It’s a brilliant touch. Like Sandra Bullock’s astronaut in “Gravity,” his sailor knows that to give into panic would result in his immediate demise – that calm, incremental progress is the only way to remain alive and afloat. That struggle plays out palpably on the storied actor’s face without word or unnecessary exposition. In saying nothing it tells us oceans about the man whose name we don’t even know.

If there’s any shortcoming to “All is Lost,” it comes in the ending, which is neither a closed loop nor satisfactory. Perhaps Chandor was reaching for something more. It’s a bold, but hollow grab. No matter. The film still showcases the talents before and at the helm and will only add to Chandor’s reputation as one to watch.