‘The Hobbit: The Desolation of Smaug’: Action picks up in stretched-out trilogy 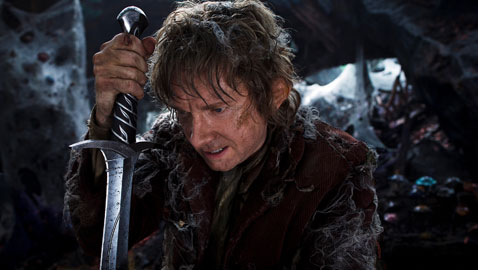 ‘The Hobbit: The Desolation of Smaug’: Action picks up in stretched-out trilogy

One might think Peter Jackson is a man obsessed with trilogies. Out of J.R.R. Tolkien’s “Lord of the Rings” trilogy he fairly spun three sweeping epics – one per book. Now circling back to Tolkien’s seminal “The Hobbit” he’s gone and protracted that single volume into a three-part movie miniseries, with the latest being “The Hobbit: The Desolation of Smaug.” 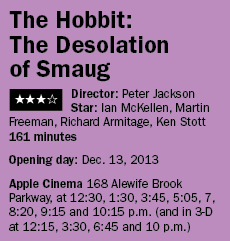 There’s something inherently anti-climactic about serving up “Lord of the Rings” backstory after the heft of those movies themselves, but Jackson and his team of writers, including “Pacific Rim” director Guillermo del Toro and Jackson’s wife, Fran Walsh, seem bent on creating mayhem out of what is actually a simple quest story. It took root slowly in “The Hobbit: An Unexpected Journey,” and now with “Desolation” they’ve loosened up and opened the throttle. Jackson too, behind the camera and at the cutting board, seems more assured. The result is bolstered by enthralling thrills and timely whimsy and is a marked step up from “An Unexpected Journey.”

“Desolation” wisely doesn’t start where “An Unexpected Journey’ ends, nor does it rehash incessantly what went on in chapter one. Instead we begin even before that, in a rain-soaked town square as a cloaked Thorin (Richard Armitage, the most human-featured of the dwarf posse in “An Unexpected Journey”) slips into a tavern playfully named the Prancing Pony. Inside, there are no other dwarves, just a battery of disfigured men (Middle Earth’s finest) who eye Thorin hungrily, as if he were the featured performer at an adult nightclub. Something foul is clearly afoot, but before a blade can be drawn the gaunt and game Gandalf (Ian McKellen, who’s been Jackson’s backbone through eight films and counting) pulls up a seat and quells the tension. During this respite, the gray-bearded wizard informs the dwarf briskly that he is now the de facto king of the displaced dwarf kingdom and that the forces of evil have put out a contract on his head.

Flashing forward to the quest at hand, the cadre of stout dwarves and furry-footed hobbit in tow (Martin Freeman as Bilbo Baggins) still needs to get to the Lonely Mountain to reclaim their subterranean kingdom from the dragon, Smaug, who usurped it and their endless bounty of hand-forged riches. Right off the bat, they encounter a were-bear known as Beorn (Mikael Persbrandt) in human form and are assailed by giant spiders before being imprisoned by wood elves. All this goes on while being hunted by a pack of orcs – and they haven’t even reached the floating shanty town (Laketown) at the foot of the mountain.

Each bend reveals a similar moral conundrum. Beorn despises dwarves because they’re greedy, but hates orcs more because they enslaved and killed most of his kind. Then there’s the elven king Thranduil (a cynically foppish Lee Pace), who’s interested in throwing in with the dwarves for a share of the loot, but incarcerates them when they reject the offer. Later, as the rise of the evil sorcerer Sauron and his orc forces becomes evident, Thranduil decides the best policy for his kin is to close the gates to the elven kingdom and sit out the looming bloodbath. The worst, however, is the Master of Laketown (Stephen Fry) who, like the pampered oligarchs in “The Hunger Games,” feeds himself gluttonously while the commoners starve.

The most fun part of the film comes as the dwarves flee the elven holding block in oak kegs and shoot down whitewater rapids through a gauntlet of orcs. They’re aided by a pair of elves, one reluctant (Orlando Bloom’s Legolas) and one smitten with one of the dwarves (a full-lipped Evangeline Lilly, looking eerily like Liv Tyler from the LOTR series), who dance effortlessly over branch and boulder while piercing orc eyes with arrows as if it were a breathing reflex. There’s a bit of Three Stooges zaniness too — one dwarf, wedged in his barrel, becomes an inadvertent projectile and transforms into a bladed (and blinded) whirling dervish of death.

It helps too that there are more than just transmogrified hobgoblins to contend with. Smaug (voiced by Benedict Cumberbatch), when arisen, is a sight to behold and a Chatty Cathy to boot. His diatribe about greed and destiny to an invisible Bilbo, employing the notorious ring of power, may be the most riveting sequence of the film.

The Hobbit series, while less smooth than “Lord of the Rings,” boasts stunning hyper-HD technology and 3-D viewing options. Team Jackson has added some new facets (and groan-worthy lines) to the yarn to make it go the nine-hour distance. But know for sure: We’ll have to wait another year and three more hours to see if the pot of gold is truly there to be had.