Enough testing and tech! We don’t need the PARCC, we need our schools back 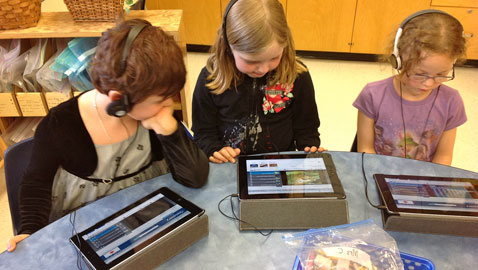 Enough testing and tech! We don’t need the PARCC, we need our schools back

Parent Tassia Thomas made this comment to the School Committee at its Tuesday meeting. It has been lightly edited for publication: 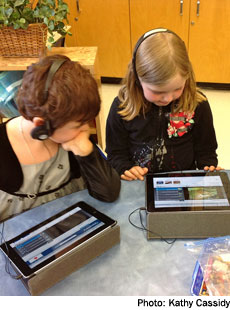 I am disturbed by the lack of thoughtful pedagogy in the schools, by low standards, by an absence of curriculum that fosters inquiry and critical thinking and by the push to address a widening equity gap through the systemic use of data driven standardized tests such as the one for the Partnership for Assessment of Readiness for College and Career. I am seeing my child’s education as series of exercises that are to prepare her for standardized tests.

Children learn best when the learning is personal; when a child inhabits the lesson, the child will learn. That is how children develop and hone their inquiry and critical thinking skills. It is in the doing. All this time spent “catching up,” gathering data, taking tests and especially pulling struggling students out of their classes and away from their peers is doing real damage to the psyches of our smallest children. This is not how you close achievement gaps; this is called tracking, and when you start this kind of separation in kindergarten and first grade you are forever sending a message to students about who is capable and who is not.

Let me give you a few examples:

When my child enters her first-grade classroom in the morning, she greets her friends, gets hugs and smiles and chooses a book to read or a paper to write. But since October there are about six kids on any given day who have headphones on at a desk with their backs to the rest of the class. They are staring at iPads. They occasionally look up, because they are young kids and they too want to greet their friends, get hugs, smile. But they can’t interact with the others, not with headphones on. They can’t do what they do, read or quietly write before morning meeting. They are not working with a teacher, they are working on machines.

In September these children were identified as “behind” in math. So they are using a program called Symphony Math to collect their responses, to assess their progress and ostensibly to improve their learning. But you know what else they are likely learning? That they do not have free will in the morning. And they may be learning that they are “behind,” that they are not as “smart” as the rest of the class.

I heard Assistant Superintendent for Curriculum and Instruction Jessica Huizenga use phrases such as “broadening our teaching and learning” and “dynamic learning experiences” when she spoke with great enthusiasm about the use of technology in the classroom at the last School Committee meeting. The use of these iPads to collect data with the goal of improving learning has very real costs to our youngest students. Dynamic learning looks like kids sitting at the edge of their seats, it looks like hands being raised in the air, it sounds like wondering aloud. It looks like manipulating materials, singing loudly in chorus, making a map with friends after a close reading. It does not look like 6-year-olds slumped in chairs staring bored at iPads first thing in the morning.

My own child, who was 6 this year, was given four district math assessments. Each test took 30 to 45 minutes to complete. Show me one study that indicates a 6-year-old can sustain focus for 30 to 45 minutes on a written test. But study after study does indicate that children in grades 1 through 3 benefit and learn real-world skills through peer interaction and play. There are no blocks in my kid’s class.

So when I talk to the 6- and 7-year-olds in my child’s class and they tell me “I don’t like reading” and “I’m bad at math,” I see stretched out in front of them a widening gap in their education. Years from now, this division will contribute to some kids graduating high school ready for college and careers and, on the other side of that gap, now-grown children who never saw themselves as learners or student and have dropped out. It’s happening in our schools now, and it will become worse with the nonstop increases in time dedicated to practicing, preparing and completing of standardized tests such as PARCC.

You want a 7-year-old to improve in a skill? Yes, use technology, go ahead and collect data, but don’t do it every day. Don’t rely on and prioritize the data and the results of an assessment program at the expense of the child. You want to close an achievement gap? You use the myriad interests of the children in the class to bring the learning to them. It’s called emergent curriculum, and you know what? You won’t find it in prepackaged form, because it’s developed by teachers based on the interests, abilities and themes in their classrooms. You want to close an achievement gap? You consider the whole child. Math is more than computer games; it’s in music, it’s counting syllables, counting dance steps. It’s grocery shopping and mapping one’s neighborhood. It’s geometry and physics in building blocks and forts. And it’s in the reflection later, in the mapping of the fort on paper, using rulers and arithmetic skills. That kind of teaching and learning takes time, but it’s time well spent. Stop filling teacher’s and children’s time with work driven to produce a result on standardized tests.

Push to ensure that students can demonstrate multiple ways of understanding, not just with a paper and pencil and certainly not just on a computer. You close the gap when kids experience success and pride in their work. You close the gap by bringing the learning to life for children, not by plugging them into iPads and away from their peers.

Cambridge spends more money per pupil than every single town but one in this state, and that figure is often close to twice as much as most towns in this state – a per-student expenditure of $27,000 in 2012, according to the Department of Education. To continue to allocate funds to big corporations such as Pearson that was the only bidder to develop and assess PARCC is the wrong course for Cambridge. This city, one known for being progressive, innovative, smart, diverse and multi-cultural, can do better. We’ve been in the forefront of many civil and cultural movements. Pushing back on the commodification of our children, on the constant pressure for children to perform on high-stakes tests, is a beginning of a revolution in education across the country. Teachers, parents, principals, superintendents: We are all saying “enough focus on testing.” We don’t need the PARCC, we need our schools back.