Man or Astro-man?, The Pack A.D., Wray: Even the gaze band on this triple bill rocks 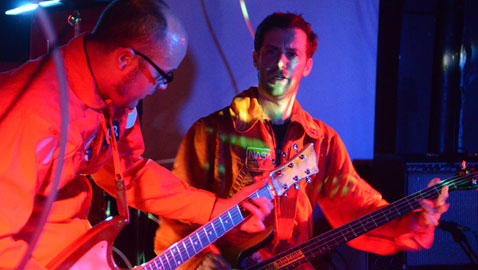 Man or Astro-man?, The Pack A.D., Wray: Even the gaze band on this triple bill rocks

Man or Astro-man?, The Pack A.D. and Wray play The Sinclair on Friday in a treat for fans of Venn diagrams.

Man or Astro-man? is the classic trio punk surf rock sci-fi band, founded in Alabama in the 1990s and reformed last year to tour behind “Defcon 5…4…3…2…1,” its first album in a dozen years; The Pack A.D. is a duo from Vancouver, British Columbia, playing garage rock, psychedelia, punk and pop with a similarly surreal bent – their official list of influences has more science fiction writers than musicians on it and their latest video and publicity photos have them in “Mad Max” garb; and Wray is a powergaze trio that, like Man or Astro-man?, makes its way up north from Alabama.

Is there enough overlap for a coherent triple bill? Here’s a look at the bands’ latest:

Man or Astro-man? doesn’t just play loud, fast and fun; it typically builds fancy sets, performs in spacesuits (and makes a point of never saying their true names, since the story is that they’re, you know, astro-men named Birdstuff, Coco the Electronic Monkey Wizard and Star Crunch) and reveals a broad sense of humor in perfect tune and some collaboration with “Mystery Science Theater 3000.” The new album suggests nothing much has changed. (Fans who saw the band at The Sinclair a little more than a year ago already know.)

The Pack A.D.’s Becky Black and Maya Miller have been basically living out of a van while touring for the past six years, and in the meantime have come so far musically that they’ve disowned their first two albums (their latest, “Do Not Engage,” is the fifth in the band’s discography if you ignore that, or the third if you don’t). Critics are sort of onboard with the idea. “Somewhere along the line, the Pack A.D. made the leap from a pretty damn good band to an insanely great one,” said Mike Usinger in Vancouver’s Straight.com back in 2012.

Wray’s first album came out in July, drawing strong reviews that endorse solidly what the band says of itself: That even though the band has “shimmering, headphone-ready tones” influenced by the mopier tracks of My Bloody Valentine, The Cure or the more esoteric NEU!, Faust or Can, “it’s music for an audience, for a rock show. It’s got a beat and you can dance to it … you can play it at a party and people will like it.” (Record label Communicating Vessels adds to that: “This is not music for a passive audience. This three-piece demands the attention of a real rock show.”)