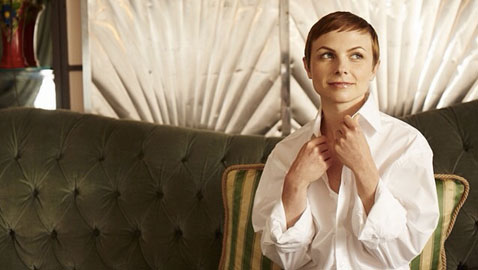 Kat Edmonson’s music is timeless in that if you hear a bit of it without knowing the source, you’d think you were hearing something from the coolest part of the 1960s – not new work by a contemporary singer-songwriter. But this is literally brand new: Edmonson’s third album, “The Big Picture” came out last week, and she plays Wednesday at Regattabar at The Charles Hotel.

Edmonson has a deep knowledge, vast affection and uncanny ability to add to the standards of years past with fresh material that sounds immediately at home. She’s sometimes sad, sometimes swings and, while often at play in our nation’s neglected fields of bossa nova and lounge, isn’t at all a novelty act: She just uses the genre as ably as she does her sinuous voice – masterful despite having no formal vocal training; she started by watching old movies on a VCR – to quirky and charming effect.

Her affection for the retro is totally on display in the video for a “Rainy Day Woman,” a song from the new album that Edmonson said was inspired by Henry Mancini’s work on “Peter Gunn” and John Barry’s take on James Bond.

“Director Robert Ascroft and I also referenced ’60s-era suspense films: ‘Charade,’ directed by Stanley Donen and scored by Mancini, as well as Michelangelo Antonioni’s ‘Blow-Up.’ We all had a ball indulging in the notion of ‘Rainy Day Woman’ as the theme to an imaginary movie,” Edmonson told USA Today, which premiered the video (seen above).

But Houston-born Edmonson, more recently known as a resident of Brooklyn and Austin as well as a one-time “American Idol” contestant, is possibly even better captured by the video posted in December for “I Don’t Know.”

In it, she’s a girl alone in a bar who starts feeling the music (and her own sweeping emotions) so strongly that she gets past her self-conscious loneliness and starts acting out, becoming her own sassy self without a care for what anyone else thinks. She’s certainly smashing doing her own thing: