‘Birdman’: Michael Keaton’s super return to the screen has plenty of unexpected virtues 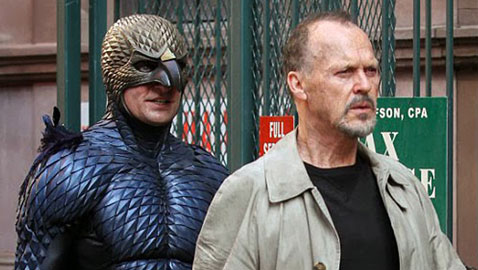 ‘Birdman’: Michael Keaton’s super return to the screen has plenty of unexpected virtues

Growing old and becoming irrelevant is on everyone’s minds, probably more so for anyone who’d ever been somebody – even if it was for 15 minutes. Think of all those childhood actors in rehab. Think of Lindsay Lohan. Now what if you were an aging actor who played a superhero? 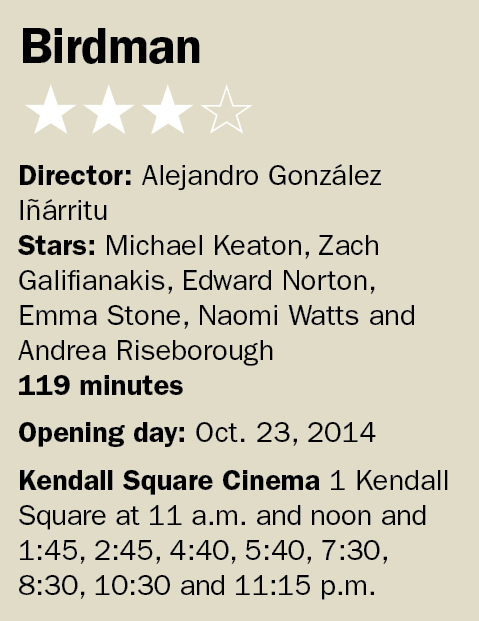 That’s the jumping-off point for “Birdman,” which boasts the catchy subtitle, “The Unexpected Virtue of Ignorance.” Michael Keaton, who not-so-coincidentally played Tim Burton’s “Batman” in the ’80s and ’90s, plays Riggan Thomson, a Hollywood actor who found fame as the star of the titled superhero franchise. Since its shelving some 20 years ago, he now seeks thespian cred by producing, starring in and directing a Broadway adaptation of Raymond Carver’s taut “What We Talk About When We Talk About Love.” When we catch up with Riggan the play is just days from opening, and much teeters on a precipice. The good people of Times Square are more than happy to have the “Birdman” in their midst, but not so much the theater crowd. Co-star and “serious actor” Mike Shiner refers to Hollywood-produced films as a form of  “cultural genocide” while “Times” critic Tabitha Dickinson (a lethal Lindsay Duncan) just can’t stand the notion of art being hijacked by overpaid, under-talented dilettantes from yonder west.

What unfolds is a backstage drama that feels like something Woody Allen might conjure up and casts shadows of Robert Altman’s “Prairie Home Companion.” On stage everything is relatively composed and controlled (an oxymoron when describing anything Carver has a hand in) but between shows, even acts, there is chaos, both physical (a stolen kiss, Riggan and Shiner coming to blows) and emotional. Riggan’s on the verge of a financial implosion, he’s divorced, his disgruntled daughter just out of rehab (Emma Stone, giving the performance of her young career) also happens to be his PA and he’s gotten one of the other cast members pregnant. Then there’s Riggan’s “Birdman” persona, which talks to him in a deep Barry White baritone, and Riggan’s belief he possess vestiges of his superhero alter-ego’s powers, namely telekinesis.

It’s a moonstruck olio of hyperbole, reality and alter-reality, and it plays together seamlessly. Part of that has to do with Keaton putting himself out there – in tighty whities, nonetheless – in an award-season-worthy performance. The other key ingredient of the fizzy gin cocktail is the brilliant, fly-system weaving cinematography by Emmanuel Lubezki (“Gravity”).  The director, Alejandro González Iñárritu, whose works include “Amores Perros,” “Babel” and “Biutiful,” lets Keaton and Lubezki work without yoke or draw, but in the backstage confines it’s Iñárritu who holds the vision tight. In the denouement, however, when the soul searching is supposed to take meaningful flight, the story pulls an Icarus with something that’s allegedly deep and profound, but in the logical sum of things is a head-scratching WTF that subverts the deeply felt sojourn that came before.

The wonderful Naomi Watts and comedic actor Zach Galifianakis are also in the cast, but serve as mostly mirrors for the madness Shiner and Riggan precipitate. Stone lands the money scene as her Sam sounds off about social media and her father’s and Carver’s irrelevance as Lubezki hangs on her large, unflinching, luminous eyes, which consume the screen and more. There’s also some dicey recurring talk beneath the catwalks about great asses and ball play, which gets whipped out with sharp sardonic humor – something Iñárritu and his team of writers should be commended for, because in most any other venture you could see such banter being served up with slack, sophomoric laziness. Overall, though, “Birdman” is not grandly witty, but dark and bittersweet and bolstered by impeccable timing and synergy.  Keaton, who’s never quite had a podium-owning role, should find himself relevant again.