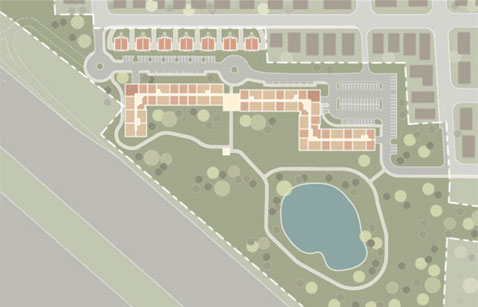 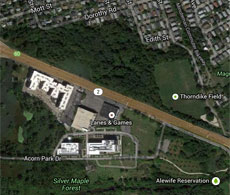 A 219-unit development called Thorndike Place, top, is proposed for the so-called Mugar site in Arlington, north of Route 2 and Cambridge’s Lanes & Games and west of Thorndike Field. Click on the photo to see a Google image of the area. (Photo: Google)

After seeing a building permit issued for part of the Silver Maple Forest in Belmont, people worried about flooding and the loss of open space aren’t going to be happy to hear the news from Arlington: A long-dormant site along Route 2 could get 219 units on seven of its 17 acres, albeit with conservation protection for the rest of the tract.

Oaktree Development, of Cambridge, hopes to build a project called Thorndike Place, described as “a land conservation and housing project … a short walk from the Alewife T Station along the Minuteman path [that] will be a Smart Growth example of transit-oriented, energy-efficient, mixed-income housing with easy access to both natural and retail amenities.”

The ecological concerns in a rapidly developing Alewife area cast a shadow over what might otherwise be a positive outcome – construction of hundreds of units of housing near Cambridge that might take some upward pressure off housing prices within Cambridge.

Gwendolen Noyes, an Oaktree founder and senior vice president of marketing, said Tuesday that the company’s civil engineer is working to solve water issues before plans are presented. Knowing the “history and acrimony” over the site, she noted three primary benefits of the company’s plan, including addressing drainage issues that cause flooding, problems she called “solvable.” The other benefits: Ensuring more than 10 acres of open space, which she called “a big thing”; and adding 55 units of affordable housing among the dozen townhouses.

Chapter 40b of state law permits developers to bypass local zoning regulation if 25 percent of units are set aside for affordable housing, as Noyes said would the case here. Use of 40b helped ensure a permit for the long-stalled Belmont Uplands project in the Silver Maple Forest despite environmental and flooding concerns.

The triangular parcel is north of Route 2, not far from the Alewife Reservation and a floodplain that has been the subject of years of protests.

Arlington’s recently approved master plan has this to say about the 17 acres, known as the Mugar site, “the last large, privately owned tract of vacant land in Arlington”:

Arlington has been concerned about the Mugar land for many years … In 2000, Town Meeting approved funding to purchase the land, but local officials could not reach agreement with the owners, who have proposed several unsuccessful development concepts for the site. The Mugar property has been altered and filled, but a substantial part of the site is wetlands and susceptible to flooding. Recent changes to the Federal Emergency Management Agency floodplain maps could have an impact on the property’s development potential.

Asked whether town officials made the feelings known Monday about flooding issues, Kowalski said that they did “in no uncertain terms.” (Noyes called the meeting “very civil.”)

The site was once considered for a Star Market, and Kowalski said Oaktree had discussions with the town about five years ago, but the town did not express interest in developing the site. She said the town suggested Oaktree consider another site in Arlington, but nothing came of that.

Noyes said the Mugars brought Oaktree into the process “to find a good resolution” to using the property.

Told the town had voted in favor of the Community Preservation Act last November and could use some of the funds protect the land, Noyes suggested that Oaktree’s proposal to develop the land and protect 10 acres was a good alternative to the town spending millions to buy the property and more to improve it.

Asked when Oaktree might take its case to the Zoning Board of Appeals, Kowalski said, “They are not going to delay.”