Planning Board seconds approval of Mass+Main tower, a bit alarmed about process 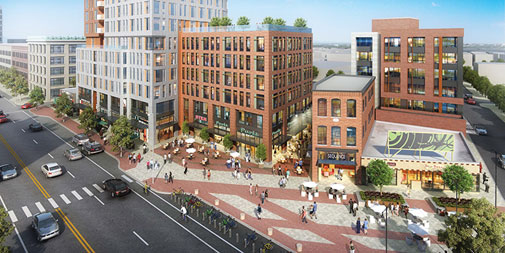 Planning Board seconds approval of Mass+Main tower, a bit alarmed about process

A rendering shows how Jill Brown-Rhone Park interacts with the proposed Mass+Main building on the edge of Central Square. (Image: Mass+Main)

The Mass+Main zoning petition to allow a 200-foot tower on the edge of Central Square won unanimous Planning Board approval Tuesday, but the petition got substantial technical changes and saw one section removed entirely, with chairman H Theodore Cohen suggesting the petition should have been completely rewritten and expressing mild alarm it had gotten so far along in the process.

“I would hope that future zoning ordinances don’t get this far along in the process without them being clarified a lot better,” Cohen said.

The board tackled squarely the two major issues with the proposal, looking at them in the context of the city’s K2C2 zoning study’s recommendations: Is it too high? Is it too dense?

Public comment at the hearing ran two-to-one in favor of the proposal, including some C2 Committee members emphasizing the proposal was consistent with their recommendations. “Even as we finished our recommendations, we were unsure the height was sufficient,” Esther Hanig said.

Member Hugh Russell summarized the board’s reaction to the density: “Two years ago we should have acted on the Central Square recommendations, and that would have created on these parcels … the development density that they’re asking for under this proposal. It’s different math, but the bottom line is very close to the same.”

The zoning petition proposes a Floor Area Ratio of 6.5, which many have called out as the highest in the city. But FAR is not the only measure of density.  It is calculated across a lot, and lots with differing amounts of open space have different FARs for the same size building. Because the proposed C2 zoning allowed transferring development rights from the residential neighborhood into Massachusetts Avenue, it would have allowed nearly the same gross floor area on the Mass+Main parcel.

An analysis from the city’s planning department showed that Mass+Main proposes 240,500 square feet of development, and the C2 proposed zoning would have permitted 189,625 square feet, plus a transfer of 47,288 from the Mass+Main parking lots, totaling 236,853. So the Mass+Main zoning increases density by only 3,600 square feet, or 1.5 percent, above the C2 zoning. The board was comfortable that that difference was in the noise. “We’re not giving them anything much that they weren’t going to get if we’d done our job two years ago,” Russell said.

Russell articulated similar thoughts on height. Calling the difference between C2’s 160 feet and Mass+Main’s 195 feet three stories, he said he thought that was acceptable, as “once you get about 80 or 90 feet, most places you don’t really see it.” Russell said that if the top three stories were moved from Mass+Main’s tower to its six-story section facing Jill Brown-Rhone Park, the park’s view of the sky would suffer.

Other board members were less certain on the height, but not opposed. “I’m not sure 195 feet is the right height, but I’m not sure it’s not,” Catherine Preston Connolly said. “The overall unit counts and density for all the lots is more important to me than whether it’s 195 or 160 [feet].”

“The additional 35 feet allows for stuff that actually would make it a much much better project, potentially,” Tom Sieniewicz said. “Thirty-five feet over 160 is a 22 percent variance over a height. It’s one-fifth. Yeah, it’s higher than what was imagined in the study, but it’s not extraordinary. So I’m okay with the height here.”

Members of the board were concerned that the petition language restricting the use of city parking permits by tenants in micro-unit apartments was inappropriate.

“I’m very opposed to the concept being written into the zoning ordinance, that one particular class of residents could not get a parking permit,” H Theodore Cohen said. “There may have been developers who said they were going to make this as part of the lease. If they want to do that as a private matter, that’s fine. All residents of the city have the same right, regardless of the type of unit they may live in. … I think it is wrong to have it in the ordinance.”

Connolly also pointed out that the provision may not be legally defensible for the city, and that “it puts the city in a terrible position of having to explain they’re not enforcing it.”

The board agreed to recommend the provision be removed from the zoning.

The three lawyers on the board – H Theodore Cohen, Connolly and Steve Cohen – all expressed significant concerns with the drafting of the petition. H Theodore Cohen went section-by-section through the petition, highlighting a laundry list of concerns that the city’s planning staff should redraft. “If I had my druthers I would throw out the amendment as its currently drafted and redraft it completely differently,” he said.

Cohen’s changes included clarifying the language that the so-called Article 19 large project review process would continue to apply; removing ambiguity in the car-sharing provisions; fixing mistaken cross-referencing section numbers; and removing the date from the reference to the Central Square design guidelines.

Incorporating the changes will fall to Jeff Roberts, of the city’s planning department.

Anthony Galluccio, Mass+Main’s attorney, said he was happy to let the city make the changes. “We didn’t object to anything that was said,” Galluccio said.

Galluccio said that he did not intend to offer a letter of commitment to the city to accompany the zoning, and that the developers tried to keep everything in the body of the petition. “Where we are now is very tenuous financially, in terms of financing,” he said, suggesting that last-minute political deals would not be able to extract additional benefits to the city beyond what Mass+Main has already promised in the zoning petition, such as 17 percent affordable housing. 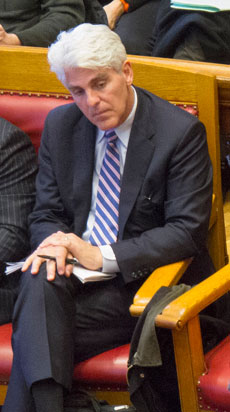 Mark Roopenian, a principal at Normandy Real Estate Partners, said a management company was fired after engaging in tenant harassment in New York at a Normandy property. (Photo: John Hawkinson)

At Monday’s meeting of the City Council, North Cambridge attorney Richard Clarey questioned the corporate values of Normandy Real Estate Partners. “What kind of people are the expected recipients of this extraordinary gift from the City Council?” Clarey asked.

“They engage in a practice called ‘predatory equity,’ detailed in this [2008] New York Times article,” Clarey said. “They took advantage of the fact that rent stabilization apartment become market apartments if you can get the tenants out. So they harassed the tenants.”

Normandy and its partners settled with the New York Attorney General on the charges last year and agreed to credit $600 each to nearly 1,700 tenants, at a cost of about $1 million.

Normandy’s Mark Roopenian responded Tuesday, visibly shaken as he read from a statement: “We invested in a group of properties in New York, and we were required to keep the owner as the manager. We fired him when we realized there were issues on how he was operating. We’ve done everything required to make the situation right with the city. In fact, New York State has issued a letter confirming that the owners have fulfilled their obligations. To be clear, that had nothing to do with this proposal, where all the affordable housing is permanent.”

Normandy and its New York investment partners last year terminated its relationship with Colonial Management, the management company engaged in the tenant harassment.