The end of an era? Draft of council’s rules says future ‘roundtables’ may be broadcast 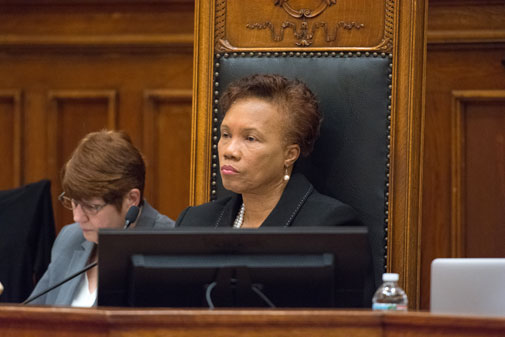 The end of an era? Draft of council’s rules says future ‘roundtables’ may be broadcast

Along with possible changes comes list of committee leaders, members
By Marc Levy

Perhaps the biggest change among City Council rules up for discussion Monday: The meetings known as roundtables may be broadcast on cable television.

The typically two-hour gatherings at which councillors can go in-depth on issues, usually with invited experts, have been barred from broadcast, although the rule keeping their content from being watched by the public except in person has been debated by the council over at least the past three terms, with occasionally silly results.

In October, councillor Nadeem Mazen proposed turning a roundtable into a “special meeting” with identical content so it could evade the rule and be televised for the community. In 2013, David Maher tried to televise a roundtable, following through on a promise made at an earlier committee meeting, by employing a workaround similar to Mazen’s: changing the name.

“This is not a regular roundtable. We’re using the term ‘roundtable,’” Maher said at the time. “This is not an ordinary roundtable, [but a] ‘working group of the Ordinance Committee.’”

Even after citizens had streamed roundtables live on the Internet to provide access and make the point the rule was archaic, pointless and unworkable, councillors stuck to a belief articulated by then councillor Marjorie Decker in 2012:

“Whether we want to believe it or not, there’s something magical about when the cameras get turned on in this room – the conversation sometimes is not the same level of conversation that we’re able to have with each other or the stakeholders. It’s trying to provide the rare opportunity for us as policymakers to talk to each other and to stakeholders so that we are better-informed about what we are thinking and questions we have to ask without the glare of the lights and cameras. If we televise them, they’re no longer roundtables.”

The rules allowed citizens to attend roundtable, record, broadcast and stream them; just not the city.

Mazen and councillor Carlone asked as recently as October for the council to end the rule against recording, broadcasting and streaming roundtables, but councillor Tim Toomey used his “charter right” to end consideration of the order – claiming it was confusing and that the issue was both discussed often (“It seems every time, there’s certain times we want a roundtable and other times we don’t, and it really becomes a political ploy”) and yet had never been discussed. (“Councillor Mazen’s been here a year and three-quarters and this is the first time it’s been brought up … all the roundtables we’ve had, no one has ever objected before.”)

“Councillor Toomey, people are constantly asking for things to be televised,” Mazen said at the time. “Constantly.”

The amended rules so far say only that roundtables could be broadcast, not streamed online as regular meetings are. The rules also say that while the minimum of six roundtables or “working meetings” will be held per year, the maximum should be raised to 12 from eight. Public comment remains barred during both kinds of meetings.

Other changes in the draft of council rules adopted Jan. 4 include language throughout to reflect that mayors and committee chairs may be female as well as male; that the vice mayor will lead in the absence of the mayor, not the longest-serving member, but that the longest-serving member will lead if the mayor and vice mayor are missing; how hearings will held for certain appointments by the city manager; and some issues of how and when agenda items are seen and posted.

In addition, a failure of chairs to call a meeting on a topic referred to their committee can be corrected by a quorum of its members. Filing for reconsideration of votes is allowed within 36 hours “after the day of the meeting,” but only for those on the winning side of the vote. Late policy orders will only be “considered” in an emergency or if action is required before the next regular meeting.

Speakers at a public hearing will have five minutes to express themselves, unless a chair sees that “the number of speakers or other circumstances would cause difficulty in completing the agenda for the hearing.” The rule had said that three to five minutes would be granted. Also, only water is allowed to be consumed in the public section of the council’s Sullivan Chamber; councillors can eat or drink what they want.

All persons shall confine their remarks to the question under debate and avoid personalities. The following will not be tolerated: uttering fighting words, slander, speeches invasive of the privacy of individuals, unreasonably loud or repetitive speech, and/or speech so disruptive of City Council proceedings that the legislative process is substantially interrupted. Any person engaging in behavior that disrupts the proceedings such that the legislative process is substantially interrupted will be warned once by the chair that if his or her disruptive behavior continues he or she will be requested to withdraw from the meeting, and if the behavior continues, the speaker will be asked to withdraw from the meeting. If the speaker does not withdraw from the meeting as requested by the chair, the chair may authorize a constable or other officer to remove the person from the meeting.

All rules of decorum and conduct for comment established by these rules shall be applicable to all individuals attending a meeting or hearing.

In addition to the draft changes to city rules, Mayor E. Denise Simmons released a list of council committees, which take on complex issues and make recommendations for when they arrive at the full council for a final vote. The arrival of committee memberships match closely the timing two years ago, when Maher was mayor and he oversaw the streamlining of committees to 11 from 17.