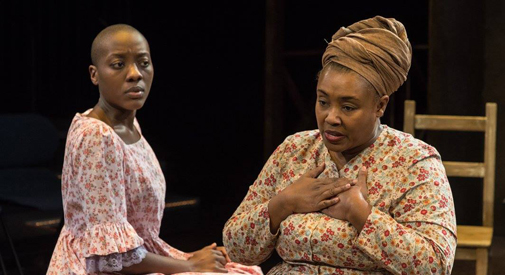 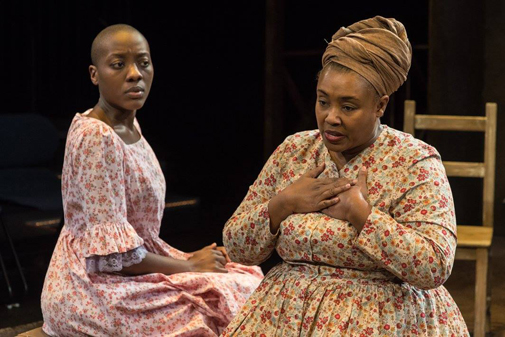 Adobuere Ebiama as Jekesai/Ester and Liana Asim as Mai Tamba in “The Convert” at the Central Square Theater. (Photo: A. R. Sinclair Photography)

The connection between the colonialism of centuries past and the Black Lives Matter movement in Cambridge gets made explicit at a free event Tuesday at the Central Square Theater, with a selection of scenes from the play “The Convert” followed by a moderated discussion between the actors and audience.

The program, a celebration of Black History Month, is being presented by the theater in collaboration with the City of Cambridge Employees’ Committee on Diversity, the City Manager’s Office and Mayor E. Denise Simmons.

“The Convert” is set in the late 1800s in Rhodesia – now Zimbabwe – as a young Shona girl escapes an arranged marriage by converting to Christianity. She becomes a servant and student to an African Evangelical just as anti-European sentiments spreads through the native population, forcing her to choose between her family’s traditions and her newfound faith. It’s a cultural and religious clash that continue to shape the post-colonial world, playwright Danai Gurira has said. (Gurira is best known as Michonne, the sword-wielding survivor on AMC’s “The Walking Dead,” and has been cast as Tupac Shakur’s mother in the upcoming “All Eyez on Me.”)

Social justice topics likely to be discussed include how persistent injustice can affect identity; how self-knowledge can add to people’s resolve to face injustice; and how we can better articulate and advance social justice matters, organizers said.

The free event is from 6 to 8 p.m. Tuesday at the Central Square Theater, 450 Massachusetts Ave., Central Square. Light refreshments will be served.

Residents who would like to see the full production of “The Convert,” which is running through Feb. 28, can use promotion code CAMBHM to get a 15 percent discount off adult tickets. Tickets can be bought online here or by calling (617) 576-9278, Ext. 1.