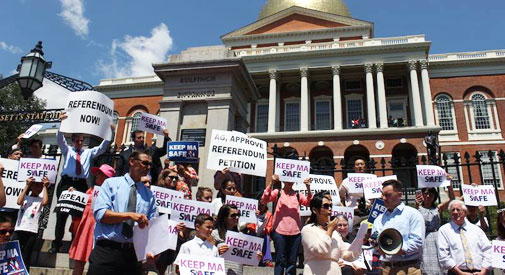 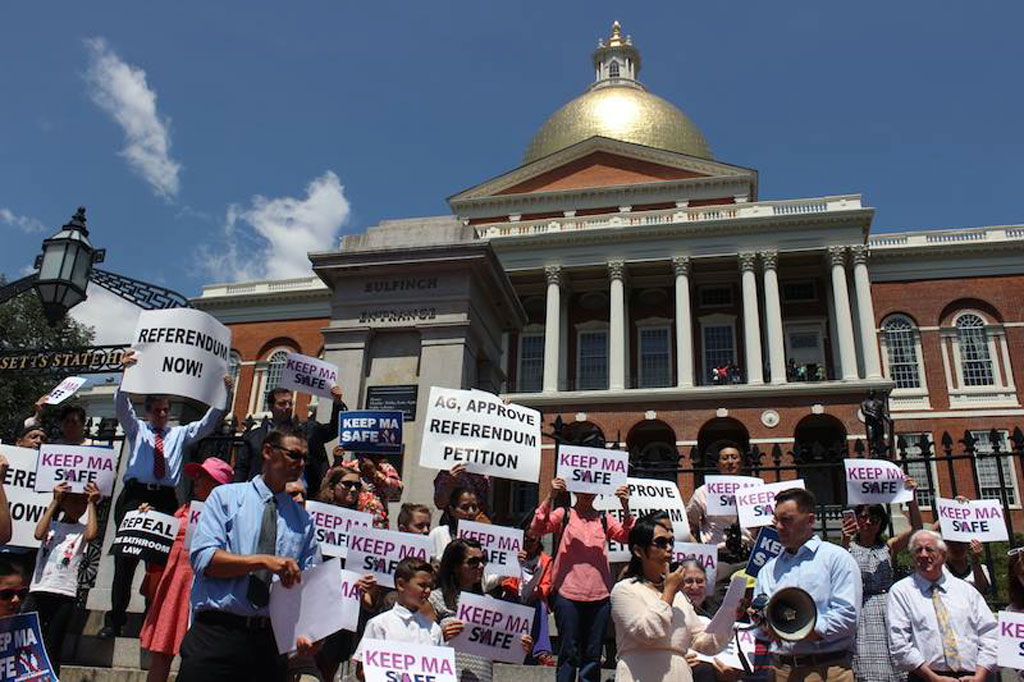 In our local bubble of liberalism it may seem shocking, but there’s an initiative on the 2018 state ballot to undo protections passed last year for transgender people using public accommodations.

Submitted last fall with 34,231 certified signatures by a group called Keep MA Safe – based in Woburn and led by Chanel Prunier, former national committeewoman of the Republican Party of Massachusetts – the ballot question seeks to repeal the law that lets people choose bathrooms and other accommodations that conform to their gender identity.

The group identifies bathrooms, locker rooms, dressing rooms, shelters, churches, fitness centers and nursing homes as places where the law “eliminates the right to privacy and safety” and puts people in danger, “particularly … the millions of women and children who are likely to be most affected by it.” The group’s website also has a page for examples of privacy violations that repeal would presumably prevent – yet among the dozens of articles, most about voyeurism and illicit videotaping, almost none involve trans people. The relevance of those that remain are iffy, considering that voyeurism and illicit videotaping are illegal no matter who does it, and the weakness of the argument becomes even more obvious when remembering the fears about gays and lesbians present in the same situation. If Keep MA Safe says a transgender woman can’t use the women’s dressing room, for instance, can a lesbian? Why not? How would one even know?

(Prunier says her group is “hearing more and more about men brazenly entering women’s safe spaces,” but this is neither evidence that it’s happening more nor meaningful to a conversation about trans people.)

Keep MA Safe’s efforts are analogous to President Donald Trump’s voting-fraud panel commission in that both are trying to solve problems that don’t exist in sufficient numbers to justify their work, and that success will only hurt a far more significant number of citizens behaving appropriately and with good intentions. Prunier and her group should remember as they try to keep “women and children” safe from predators that it’s their own president (who is trying to ban trans people from the military, where they only want to serve their country) who has walked through beauty pageant dressing rooms of girls and women and bragged about it. Here’s the president of the United States, a straight male, talking about that on “The Howard Stern Show” in 2005:

“Before a show, I’ll go backstage and everyone’s getting dressed, and everything else, and you know, no men are anywhere, and I’m allowed to go in because I’m the owner of the pageant and therefore I’m inspecting it. You know, I’m inspecting because I want to make sure that everything is good. You know, they’re standing there with no clothes. ‘Is everybody okay?’ And you see these incredible looking women, and so, I sort of get away with things like that.”

The conservative group repeal’s effort may well fail. A May 2016 poll by Suffolk University and The Boston Globe found more than 53 percent of respondents supported allowing trans people to use their chosen public accommodations, and only 30 percent outright opposed it.

There are actions to take if you are worried about repeal or simply want to help publicize the fight against this regressive, unreasoned attack on civic rights, and the organizing group Freedom for All Massachusetts would appreciate the assist. In addition to phone banking that takes place from 6 to 9 p.m. Thursdays at the Massachusetts ACLU, 211 Congress St., Boston, there are volunteer recruitment sites to visit:

Sunday from 10 a.m. to 2 p.m. in the Charles Square section of Harvard Square – the plaza between The Charles Hotel and Harvard’s Kennedy School of Government.

Even easier is to go to Freedom for All Massachusetts’ website and sign a pledge to protect trans equality in the state.

While there’s nothing about this situation that’s funny, there is one element that’s so bizarre it’s impossible not to mention it: Prunier is a bit trans herself – she identifies herself as “chairman” of Keep MA Safe.