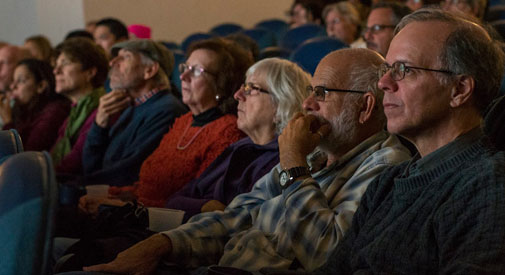 The public is invited to the kickoff of the seventh annual Arlington International Film Festival with a showing of “The Promise,” by director Zeljko Mirkovic, a 2016 documentary about the people of Serbia.

The New England premiere of this film is set for 7:30 p.m. Saturday at St. Sava Cathedral, 41 Alewife Brook Parkway, North Cambridge. Tickets are $20, including wine and hors d’oeuvres from the sponsors of this event, the International School of Boston – based in Cambridge – and the French Consulate Boston.

The film festival itself, which draws more than 2,000 cinema fans annually to its more than 50 screenings, is Thursday through Sunday at the Capitol Theatre, 204 Massachusetts Ave., Arlington. Tickets for individual screenings can be bought at the box office or online.

“The enthusiasm that culminates in Arlington around the film screenings, visiting directors and conversations is exciting; people come together infused with energy and ideas because of the stories shared by amazing indie filmmakers,” event director April Ranck said in a press release. “It is wonderful to see the interaction among community organizations, businesses/corporations, educational institutions and audience members.”

The festival curates new local, national and international films for audiences from hundreds of submissions annually, with criteria including creativity in storytelling and technical execution that accomplishes the festival’s mission of fostering appreciation for different cultures. “The Promise” represents the vision and passion of the French as well as the Serbian communities, festival organizers said.

The festival has a free, official app called Whova that allows users to view the event agenda and plan their schedules; plan ahead about whom to meet by browsing attendee profiles; send in-app messages and exchange contact info; find attendees with common affiliations, education, shared networks and social profiles; get update notifications from organizers; and access GPS guidance, maps and parking directions.

After downloading, users can sign up on Whova with the email address used to RSVP for the event or a social media accounts. If asked to enter an invitation code to join the event, use “aifqk.”

Cambridge Day, YourArlington.com and InsideMedford.com, which is online as MedfordTop10, has signed on to sponsor the festival’s Student Filmmaker Awards program. The sites deliver news and information about their respective communities, and representatives of each site were offered the chance to publicly present a festival award.

The festival has announced a partnership with Purple Arrow Films, a consultancy established last year to focus on film distribution and film festival promotion worldwide.