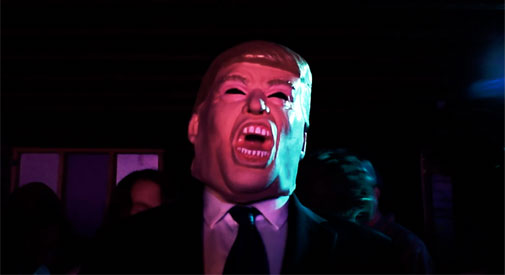 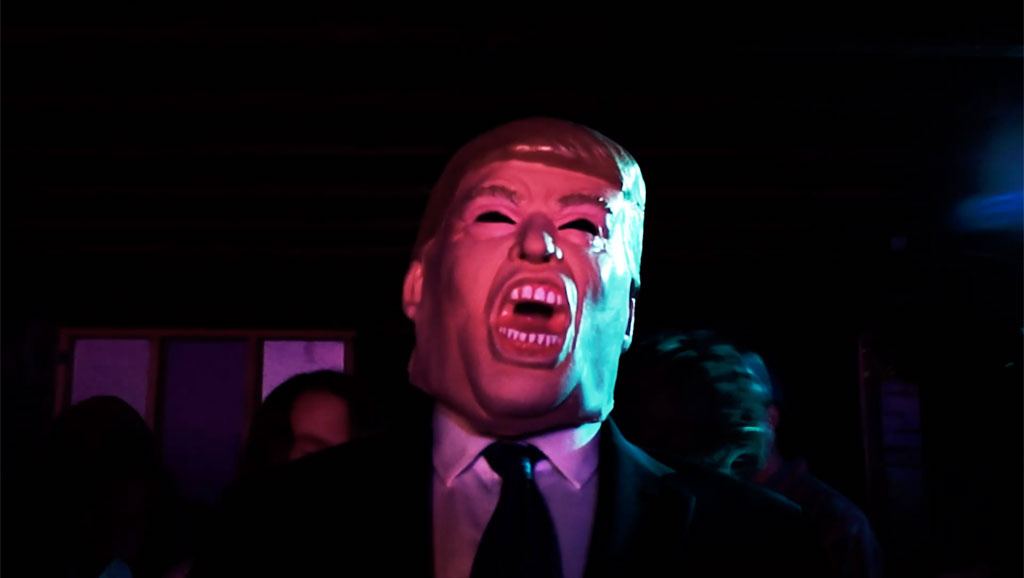 The Cotones’ video for “The Party’s Over” has a surprise guest star.

Indie/alternative rock band The Cotones released a single Sunday – the two-year anniversary of President Donald Trump’s inauguration – called “The Party’s Over” that gives the unpopular politician a solid, propulsive shove out the door.

Captured by director Madhav Kohli, the band is seen performing at the Garden of Allston nightclub to an audience that includes a visitor in a Trump mask at least half as creepy as the man himself. Singer Luke Frees comes face to face with it to deliver the song’s deliciously sneering central message:

If you don’t mind, it’s about time you resign
Although I know you want to stay
It’s up to you how you choose to lose:
A clean break or a drawn-out public decay.

There’s been a ton of anti-Trump tunes, starting before Election Day from the likes of Le Tigre and Death Cab For Cutie through more recent protest songs by Janelle Monae and Kendrick Lamar. The Killers drew attention a week ago with a standalone single called “Land of the Free.” But The Cotones’ track is one of the few that’s new enough to capture the feeling that a steady stream of investigative revelations and political missteps has the Trump era already in retreat.

“If you’re on the other side of the aisle, or if you’re a wary Trump supporter who’s considering jumping ship, this song’s probably just going to piss you off even more. And that’s okay,” Frees said. “This is just an angsty diatribe from four kids in their early 20s who only want the world to be better than what it is.”

Along with Frees, who also plays rhythm guitar, the Berklee College of Music-founded Cotones are Ryan Bale on lead guitar and backing vocals; Brad Williamson on bass and backing vocals; and Zack Brody on drums. The song is urgent but funny, sacrificing not a lick of listenability for its message, and the band seems to be having a good time offering the president a reasonable suggestion, given the direction things are going: “Get out while you can, motherfucker!”