Fort Washington Park’s past, present and future is grant funded for a monthslong examination 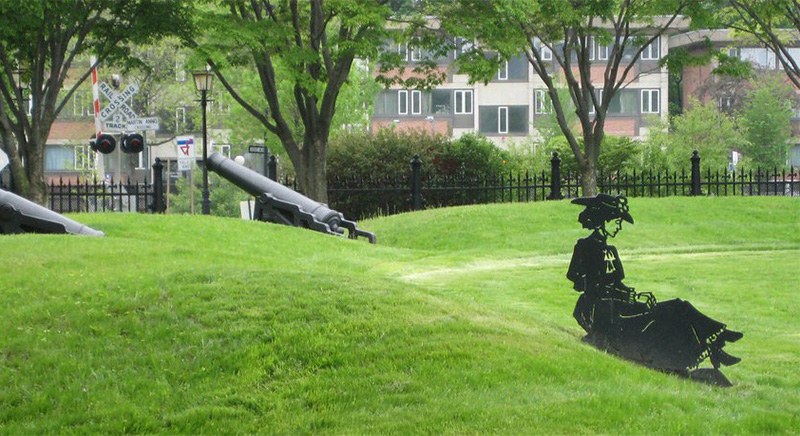 Fort Washington Park’s past, present and future is grant funded for a monthslong examination

As it moves forward with its Year of Cambridgeport, History Cambridge is excited to share that it has received a grant from the Massachusetts Society of the Cincinnati for a series of programs on Fort Washington Park. With a long history that dates from the time of the Revolutionary War, this park is a mainstay for many in the Cambridgeport neighborhood. History Cambridge programs will explore the origins of the park, its development over time and the ways in which Cantabrigians envision engaging with this space in the future.

Located on what is now Waverly Street in Cambridgeport, Fort Washington was constructed as an earthworks by soldiers in the Continental Army under the orders of Gen. George Washington in November 1775. The earthworks were designed as a fortification from which to defend the city during the Siege of Boston; cannons were mounted on the slopes built by the soldiers and trained on the approaching British army. When the Continental Army moved out of Cambridge in 1776, it took the cannons; they were replaced by another set of Revolutionary-era weapons that remain in place today.

Although Fort Washington did not suffer the same fate as most other Revolutionary fortifications, being leveled and turned into residential or commercial space, it did fall into neglect during the decades after the Revolution. In the 1850s, the City of Cambridge acquired the land from the handful of prominent families holding it in common since the war’s end and turned it into a park, installing period cannons taken from nearby Fort Winthrop and enclosing the area with a decorative wrought-iron fence. In their deed, the Hastings, Dana, Willard and Bartlett families stated that “the above premises when suitably enclosed and adorned by said city, shall forever remain open for light, air, and adornment, for the convenience and accommodation of the owners of estates in said Pine Grove, and of the Public generally.”

In 1857, the park was dedicated, and has been a public space for the past century and a half. During that time, as Cambridgeport has developed and changed, the park has gone through several cycles of disrepair and reclamation by organizations such as the Daughters of the American Revolution and the Friends of Fort Washington; at present, it is used primarily as a space for neighborhood residents to bring their dogs, although the remaining earthworks and the more recent sculptures by Madeline Lord have helped the park retain some of Revolutionary feel.

With support from the Massachusetts Society of the Cincinnati, History Cambridge will host three events exploring Fort Washington park. The first program, in April, will focus on the fort’s history, including how it became a public park. In May, a public charrette at the park will meet with neighbors, collaborators and stakeholders to learn more about how the park is used, as well as how Cambridgeport residents envision its future potential as a public space. In June, findings will be shared with the public. The grant includes funding for a graduate-level intern to work with History Cambridge on research and programming around these events; interested applicants are encouraged to view the position description.

The organization is excited to embark on this exploration of Fort Washington Park, its history and place in the Cambridgeport neighborhood. For information on the Year of Cambridgeport, visit the History Cambridge website and sign up to be notified about upcoming events. History Cambridge looks forward to making history with you this year!

History Cambridge started in 1905 as the Cambridge Historical Society. Today we have a new name and a new mission.

We engage with our city to explore how the past influences the present to shape a better future. We recognize that every person in our city knows something about Cambridge’s history, and their knowledge matters. We listen to our community and we live by the ideal that history belongs to everyone.

Throughout 2023, we are focusing on the history of Cambridgeport. Make history with us at historycambridge.org.