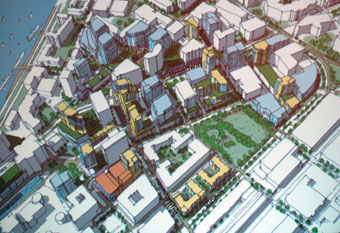 A rendering shows the Kendall Square of the future, with a large park replacing a parking lot serving the federal John A. Volpe National Transportation Systems Center — and the center gone as well. (Image: Goody Clancy)

A block-sized park on what is now the federal John A. Volpe National Transportation Systems Center was presented Tuesday by a city consultant as vital to reinventing Kendall Square — similar to a plan in its own East Cambridge rezoning proposal from 2001.

“The proposed park at the Volpe site is going to be the heart of Kendall Square before too long,” said David Dixon, leader of the team from consultant Goody Clancy, which was hired a year ago with the expectation of getting a final report in December 2011. In describing public spaces that creates interaction and brings the area to life, he said, “We start with the Volpe site, which is merely a community park. No matter where you live in Kendall Square or East Cambridge, this should be an important park for your community.”

In the renderings shown during the presentation and group discussions, held from 6 to 9 p.m. at the Marriott hotel in Kendall Square, the park was shown as replacing the sprawling Volpe parking lot between Potter and Binney streets, sparing the recent construction housing Voltage Coffee & Art and Abigail’s Restaurant but tearing down and replacing other nearby buildings to add space for some of the anticipated 2,000 to 2,500 new housing units, up to 3 million square feet of office and research space and, at ground level, between 200,000 and 250,000 square feet of retail. The park was described as being a focal point and crossroads for the community, and the starting point of adding significant amounts of greenery — including rooftop gardens — to an area that looked pretty parched when described two weeks ago at a City Council meeting.

“We hope to accelerate this a little bit,” Dixon said.

Eleven years ago, the Planning Board and Goody Clancy presented a plan with a similar sound:

Zoning recommendations for the [Planned Unit Development] at Kendall Square, or as it is more commonly known, the Volpe Center area, reflect the desire for housing and open space to help enliven Kendall Square during all hours of the day. Proposed zoning changes would result in a mix of uses on the site. The zoning would apply to both the privately held property and the federally owned land currently used by the Department of Transportation should it be redeveloped for nongovernmental use in the future.

The federal government says it has some 1,144 workers in Cambridge, including 550 direct employees and 500 “on-site contractor employees from major private-sector consulting firms” at Volpe to come up with innovative transportation solutions for the country. It’s both a fee-for-service organization and part of the U.S. Department of Transportation; the department funds about two-thirds of it and other federal, state, local and international agencies and entities pay the rest in exchange for its experts’ work. It’s not clear that any of this is leaving soon. 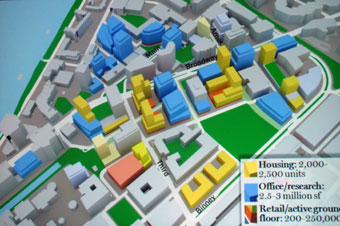 A graphic shows the uses intended for around the proposed park, including up to 250,000 square feet of retail. (Image: Goody Clancy)

“I was going to ask David Dixon to run his square feet for business, housing and retail past us without this fantasy of the Volpe Center,” said Mark Jaquith, a longtime development watcher from East Cambridge, after Goody Clancy wound up its slideshow presentation and as the several dozen residents and officials watching headed into small discussion groups. “Which is by no means on the table, but is included in all the numbers.”

Jaquith’s concern was that the vision presented by the $350,000 consultant falls apart without the Volpe park. “Everybody has said as much, and everybody has also said, ‘Well, we’ve talked with them once or twice,’ but there’s nothing firm,” Jaquith said. “It looks like nine-tenths of the housing is on the Volpe site.”

It’s true there are four significant housing structures imagined on Volpe land, to the west and south of what would be the park, but Dixon also described towers arrayed along Main Street and other areas of the square — designed to let sun in, avoid looking “big and monotonous and blocky” by shrinking back at a height of 85 feet and to have bridges between buildings rare enough and designed to not cast oppressive shadows — that would hold housing as well as retail and business uses. One slide called for to to six buildings rising to 300 feet so long as the top 50 feet was reserved for housing.

“To me the most important thing in Cambridge is housing, and if they could actually bring more housing then this all works,” said Saul Tannenbaum, who’s been writing about city development on his Cambridge Community Television blog. “But you had even the neutral parties from Goody Clancy talking about how not to trust commitments and having to build incentives into the zoning to make sure people do what they say they’re going to do.”

Indeed, Dixon referred directly to “people who say they’ll build housing and never quite get around to it” in introducing a proposed rule saying a developer has to begin building housing by the time its accompanying office or research space is 40 percent built and must finish the housing by the time the office or research space is 80 percent complete. It was unmistakably a reference to Boston Properties, which city councillors and outraged citizens have cited in recent weeks as having promised but backed away from housing construction in Kendall three times — and dangled it yet again last month to win construction for Google that will cause the public to lose 40 percent of a beloved rooftop garden.

Although Dixon also referred to having a “real diversity of housing types serving a real diversity of people,” the conversation around that vow seemed to be all about take-home pay, and that didn’t please Charles Marquardt, another East Cambridge resident and a recent council candidate.

“I’m disappointed there were no families included in the housing mix. There was no discussion in their presentations of family housing, no three-bedroom units, no children,” Marquardt said.

He also thought the consultant was dramatically underestimating how much retail could go into Kendall, perhaps because one slide referred to seeking 50,000 square feet of additional retail, although Dixon also spoke of wanting “a real mixed-use district … it must be an active place, buzzing with life” with retail not even counting when figuring how much floor area ratio a developer gets for a building. While the mix in Kendall is described as now being 85 percent commercial, 14 percent housing and 1 percent retail, Goody Clancy foresees commercial uses becoming 50 percent overall, even as the sector saw 60 percent growth in projects — because housing was to grow by 235 percent and retail by 150 percent.

The presentations also made a priority of enhancing recreational river access and making more use of the nearby canal; smart, car-free growth, including the need for expanded bus routes into Kendall from Lechmere, Central and Sullivan squares and a zoning requirement that, as explained by Susan Rasmussen, the city’s director of environmental and transportation planning, means “each and every project will be required to do a traffic study”; and of savvy environmentalism, including a look at garden-cooled roofs, vegetated walls, tough LEED certification requirements (yet to be set) and a feature unique to Kendall Square: using steam waste from the GenOn Kendall Cogeneration Station power plant to heat and cool nearby buildings. “Steam has the potential to have very low environmental impact because it’s a waste product that’s being generated anyway,” Rasmussen said.

A meeting about the future of Central Square takes place tonight from 6 to 9 at the Citywide Senior Center, 806 Massachusetts Ave., Central Square.