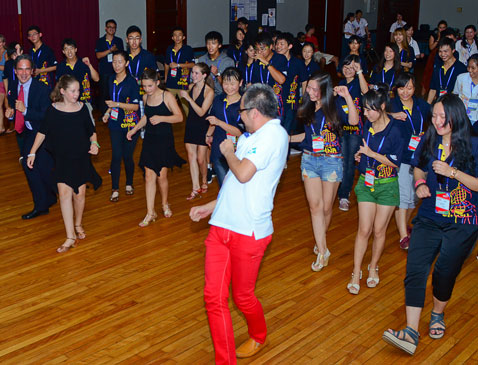 After getting their Cambridge Youth Business diplomas, teens visiting from China and Taiwan get a dance lesson for “The Great East Meets West Youth Cambridge Sock Hop” on Monday in Porter Square’s Masonic hall. (Photo: Imagix)

There were plenty of reasons 76 future entrepreneurs from China and Taiwan wrapped up their visit as part of Cambridge Youth Business with a dance.

While the bass of the music and occasional applause thundered from the basement banquet hall of the Masonic hall in Porter Square, co-founder Rich Maaghul explained that when these teens become entrepreneur they won’t need just ideas — they’ll need the social skills to help sell those ideas. The dance also served as a celebration for the diplomas just granted the kids. And they were, after all, kids.  They’d traveled to America, taken courses at Harvard University, and deserved some fun before flying back Tuesday.

Finally, “The Great East Meets West Youth Cambridge Sock Hop” served as a good metaphor for how the youth of an economic powerhouse such as China will engage with Americans, especially those from Cambridge, and 10 local youth were also downstairs at the dance serving as mentors, hosts and dance partners.

The program, founded just a few months ago, isn’t just for Chinese students, and it’s not just for students from abroad; it’s also quickly becoming a major partner for Cambridge Public Schools’ out-of-school programs, a way to inspire local kids to keep up the innovation for which their hometown is already famous.

“This is a high-end, global approach. For Cambridge kids this is going to be huge — to meet kids from other countries and learn from each other,” said Susan Richards, the out-of-school-time coordinator for the city’s Agenda for Children. We were excited “when these guys popped up with their program. There really aren’t many of these kinds of opportunities.”

Forty Cambridge middle-schoolers will begin the five-day-a-week after-school program starting Sept. 14, Maaghul said, and he and Richards believed the partnership could grow quickly from there.

“This is the 21st century. School shouldn’t end at 3 p.m., or end in June,” said Richards, who thought local nonprofits would benefit from Cambridge Youth Business’ professional know-how as much as the kids would benefit from its entrepreneurial courses.

And soon the opportunities will start as young as 9 years old and extend to 18, Maaghul said.

“We want to get them while they’re young,” he said, describing courses that include instruction at Harvard and the Massachusetts Institute of Technology to show kids how to come up with entrepreneurial concepts, create a business plan and secure funding.

Founded with Antonio Reyes, billed by the group as director of Latin American operations for the CBN/Family Channel Network, and John Sortino, founder and former CEO of the Vermont Teddy Bear Co., the organization is looking at rapid expansion, Maaghul said, bringing in 480 kids for each three-day and five-day accelerator program in the summer months and adding a January program in 2014. By 2016, the organization plans to be in five markets, growing from Cambridge to California’s Stanford, then to Columbia in New York, the Wharton School of Business in Philadelphia and finally to George Washington University in Washington, D.C.

“We wanted to take this throughout the country. But even if we go to other locations, it’s always going to be Cambridge Youth Business. Our base is here,” Maaghul said.

Many Cambridge kids will participate through scholarships and be subsidized by the accelerator programs. It’s another advantage to the public school district working with a for-profit program run by business people who know how to secure corporate backing, Richard said. One such backer: the Boston-based b.good burger chain, which sells Toscanini’s ice cream, has a Harvard Square location and was co-founded by a Harvard grad. Another b.good co-founder, Jon Olinto, spoke briefly at the event, as did city councillor Leland Cheung — who drew cheers from the kids by speaking in rusty Chinese before explaining his involvement with the business: “I got involved because I know how important entrepreneurship is for our city. We have the highest density of entrepreneurship anywhere.”

“Yuan or dollars, commerce will unite us,” Reyes said afterward.

While it’s the home of the founders, Cambridge is also the perfect place to start because one in 10 kids from China say they want to go to Harvard, said Sortino, who serves as president. (Maaghul is chief financial officer and Reyes is executive director.)

On Monday, each of the young entrepreneurs came away from the ceremony and dance with a diploma saying they’d done just that: attended courses at Harvard. The Chinese parents paying for the program consider it an investment in getting into a good university, and the students are enthusiastic for several reasons.

“I’ll use this knowledge in later life,” said Ren Yanlin, a student from a private school in Taiwan. Speaking excitedly through a translator while clutching his Cambridge Youth Business diploma, he praised his teachers at Harvard and explained that he already has an entrepreneurial idea: a grocery store that sells goods from around the world to China’s growing middle class, satisfying some of the same internationalist curiosity that brought him to Cambridge.

The whole experience, he said, “will help a lot with my goals.”