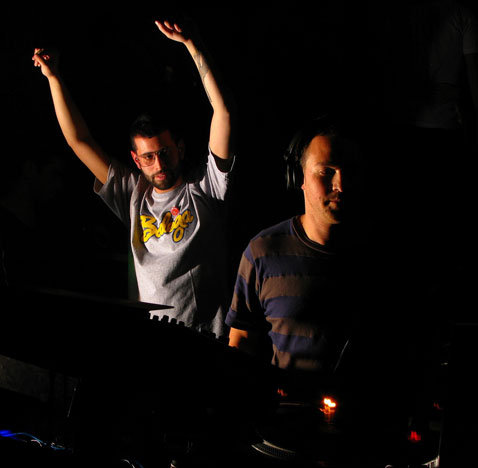 The announcement was made Monday on the Soul Clap blog along with a preview of the first release from Soul Clap Records: a track by Night Plane (described off being “from Texas via Brooklyn”) due out officially on an October EP. (The song, “Gates of Dawn (Burning Man mix)” is available as a free download.)

“Finally, after years of preparation on the dance floor, in the studio and of course in the DJ booth we’ve gained the peace, love, knowledge and understanding to write our own musical future,” wrote Eli Goldstein, 29, the Cambridge-born member, and Charles Levine, 30, of Brookline. “From this day onward Soul Clap Records is born: a place of mystery, art and experimentation. A home for our music and our many aliases and collaborations.”

Soul Clap honed its skills at MIT tunnel parties and regular performances at Phoenix Landing and the Middlesex Lounge and now travels around the world performing, teaching college courses about dance music, doing workshops on music production and “always making sure to include forgotten classics in their epic DJ sets,” according to their official bio (which includes “winters in Miami training at ping-pong”).

The DJs also put together Dancing on the Charles events at Cambridge’s American Legion hall for three years starting in 2007, but it was in part that experience that Soul Clap said pushed them out of town.“We always went out of our way to go by the book, to have a safe environment, and it ended poorly,” Levine told The Boston Globe. “That was the final blow after working as DJs and promoters in Boston for over a decade. It wasn’t until that moment that we threw in the towel. … We moved to Berlin that summer of 2010. From Berlin we found Miami.”

In April, as the Together electronic music and technology festival made its home in Central Square, the DJs won praise from David Day, editor of DigBoston, as being “probably the biggest music success story out of Cambridge in the past five years, probably bigger than Passion Pit.”

April also saw the release of their first full-length album, “EFUNK” on the Wolf + Lamb label — owned by friends and collaborators — and in May they returned to the Phoenix Landing to spin a set.

“It was kind of amazing to watch it happen,” Randy Deshaies, a Boston-based promoter, told the Globe at the time of their return. “One day they were here playing at the Phoenix and Middlesex, then they were gone for months touring. I knew they were making progress, but I wasn’t even aware that they were getting that big … Then when [I heard] the DJ-Kicks mix compilation and their mix on the internationally famous Essential Mix on BBC Radio 1, it was real. They were international superstars.”