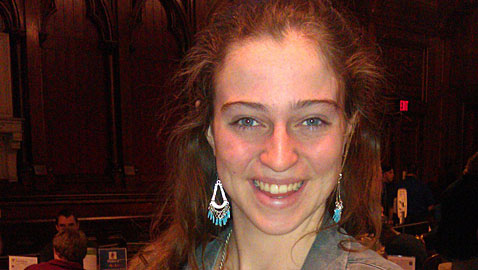 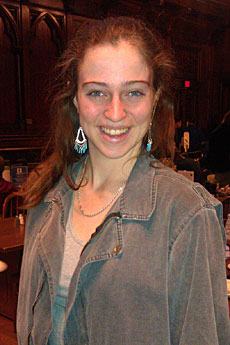 Five questions. We just want to ask you five questions — or, rather, get five recommendations of things to read, listen to, watch, eat and buy from people who live, work or otherwise spend time in Cambridge. Here are some from lifelong resident and now Harvard sophomore Brenna Hilferty. When Brenna hasn’t been studying, traveling or playing soccer this summer, she’s worked as a “Hahvahd” guide for Trademark Tours.

Read: It almost goes without saying that as a Harvard student, Hilferty enjoys to read. “Reading is easily one of my favorite activities, so it’s difficult for me to select just one book. But if I had to choose I would pick ‘Seven Types of Ambiguity,’ by Elliot Perlman,” says Hilferty, who has diverse tastes but tends toward the quirky. “The story is told with careful precision from the perspective of seven individuals whose opinions on their reality often clash.” Perlman is an Australian who writes on economic injustice and poverty, themes that speak to somebody who walked past the Occupy Harvard movement on her way to and from class every day for months, and “Seven Types of Ambiguity” has been described as being about “obsessive love in an age of obsessive materialism.”

Listen to: Hilferty has eclectic tastes in music, as well, but she particularly enjoys country. Her current recommendation is the mellow “Orange Sky” by London native Alexi Murdoch. His music is remarkably like the music of her godfather, Larry Flint, a Cambridge musician with an Irish-Country band.

Watch: Hilferty describes herself as more of a movie person than a television person, but she has one very strong television preference: “‘Gilmore Girls.’ Hands down. Everyone should go and watch it now. Instead of reading this you should watch ‘Gilmore Girls’! Totally serious. Do it!” For those of you born after the late 1990s, “Gilmore Girls” was a popular CW dramedy airing from 2000-07 (the first six seasons aired when it was still called the WB!) about a mother (Lauren Graham) and daughter (Alexis Bledel) who, because of the mere 16-year-age difference, are more like best friends than mother and daughter. They live in the fictional small town of Stars Hollow, Conn., that, given its vibrant and eccentric characters, might as well be the rural version of Cambridge.

Eat: Although Hilferty lives and goes to school in an area with a wide variety of restaurants, “as a broke college student, I don’t eat out very much during the school year. But I would recommend purchasing a small, delicious, chocolate mouse at L.A. Burdick Chocolate,” she says. Burdick’s, at  52 Brattle St., Harvard Square, is a small chain based in Walpole, N.H., selling chocolate in many forms, but the chocolate mice are a specialty. Dark chocolate mice have a “whipped orange” flavor, the milk chocolate have a mocha interior and the white chocolate come in “cinnamon and a touch of port.” The stores also sell chocolate penguins and chocolate bees.

Buy: Hilferty has friends at Harvard from as far away as Egypt and Jordan, and she traveled this summer to London and Oahu. “I spent three heavenly weeks farming in Oahu this summer and it was incredible. I swam with a sea turtle, jumped off a waterfall and scouted out a baby albatross,” she says. So her first recommendation for something to buy is naturally travel related, and her choice of destination is also “easy”: “Buy a plane ticket to Hawaii,” she says. “Want to do any of those things? Go to Hawaii.”