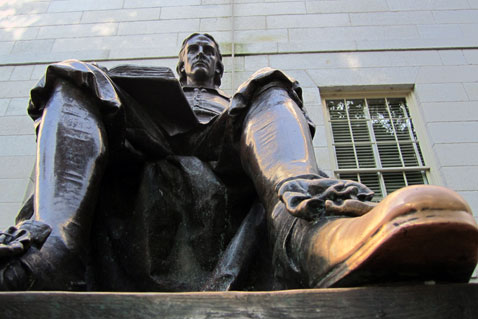 The statue of John Harvard in Harvard Yard is not actually a statue of John Harvard, and may be be modeled after a former president named Leonard Hoar. One possible reason: Harvard has a tradition of naming a house after every president — Elliot House, Kirkland House and so on — but in this case, decided it would be better not to honor Hoar that way. (For obvious reasons.)

That’s the kind of trivia one can learn from travels through the campus with Trademark Tours, which says it educates and entertains more than 50,000 visitors per year from as far away as Israel and Germany.

It all began in the summer of 2006, when Daniel Andrew, the founder of the company, worked as a tour guide at Harvard University.

“I remember sitting in the admissions office and I would get so many calls about people who just wanted to tour Harvard, but the only tours at the time were for prospective students,” Andrew said.

He started the company to give tourists the chance to spend time with Harvard students, whom he hires as guides, and experience history as a “funny,” “offbeat” and theatrical performance.

Decked out in crimson shirts and straw hats, the students deliver that. From encouraging the audience to boo at the mere mention of rival schools Yale and Princeton to teaching the tourists the correct pronunciation of Harvard (it’s haah-vahd), the guides are chosen for their abilities to entertain, Andrew said.

For the audition process, each applicant is asked to memorize the same, 12-page portion of the tour and perform it in front of a crowd.

“Everybody who applies to be a tour guide is smart — I mean, obviously, they’re in college, but what we’re looking for is someone who has that special ability to hold and keep a crowd’s attention,” Andrew said.

Andrew hopes that all those who go on his tour feel like they truly experience Harvard. “When I was young, my family and I would always go on vacation, and we would feel a sense of satisfaction if we had done and seen all there was wherever we went,” he said. “We want the people who go on our tours to feel that same sense of satisfaction.”