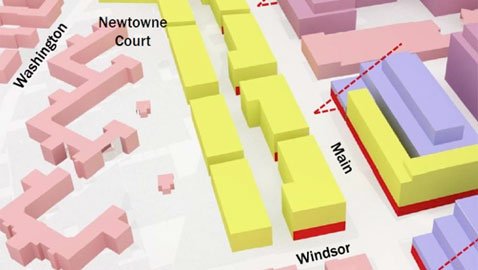 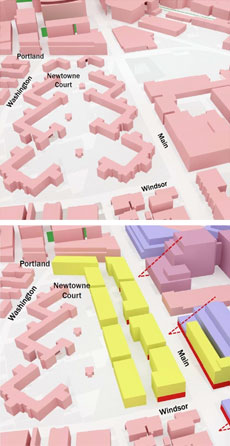 A rendering by city consultant Goody Clancy shown in March suggests Newtowne Court public housing could be replaced by a three-story structure with ground-floor retail and restaurants.

As the City Council returns to business after a summer break, several items on Monday’s agenda could be easily grouped in a narrative of affordable housing, a squeezed middle class and open space improvements.

At least two of the councillors’ policy orders reflect development firestorms of the past few months, with Denise Simmons asking the council’s housing committee to look into the possibility of increasing developers’ affordable housing requirements; and Ken Reeves suggesting that the Cambridge Housing Authority look into long-term protections on public housing such as Newtowne Court and Washington Elms “so that these developments will always be dedicated long-term affordability housing areas.” (A report by Bill Cunningham of the Alliance of Cambridge Tenants said Reeves had once identified the housing as “very valuable land.”)

And Tim Toomey wants a report back from city managers on how the city is facilitating affordable housing opportunities for middle-class families, which often “do not fall within the range of income required for the affordable units.”

The increasingly hard time middle-class residents are having buying and staying in Cambridge has been an issue for years. On Aug. 6, though, the council let a project die — with developer Forest City keeping the option to refile immediately — in part because of neighborhood concerns over housing and the last-minute nature of a deal in which the developer would keep more of its apartments affordable.

Before that, the consultant hired by the city to craft a vision for the future of Central and Kendall squares stumbled by including Newtowne Court as a possible site for development. Tenants were not happy, or easily mollified. In the ACT report, housing activist Jonathan King was quoted calling the vision “absolutely chilling” and recounting how a member of the Central Square Advisory Committee asked “whether any discussions had taken place with Newtowne Court representatives (or the Area IV Coalition), and of course the answer was no.”

Even with federal subsidies, low-income tenants are forced to move away because of skyrocketing Cambridge rents, some to as far away as Burlington, Salem and Rockport, according to studies and housing officials, and funding for the subsidies have shrunk. Cambridge has stopped accepting applications with about 4,700 households — almost 12,000 people — already on housing waiting lists.

Another thing that helped sink the Forest City proposal was public cynicism over what neighbors would get in return for Cambridge granting the developer’s zoning change. Not only did residents tell the council they wanted more direct compensation for the neighborhoods where construction took place; they said recent proposals were undoing what had been won in the past.

“We might get a new residential building. Sounds great. Until you look at the details,” Mark Jaquith wrote in July of the Forest City plan. “Oh, they are going to build it on open space that was part of the original mitigation. That makes it what, anti-mitigation? De-mitigation? I’m not sure there’s a word for it.”

The policy orders speaking to these concerns Monday come from Toomey, who wants the council to “go on record agreeing that a minimum of 80 percent of mitigation funds should be distributed within the neighborhoods” affected directly by such projects; and from Leland Cheung, who wants city managers to track and report on new and completed mitigation commitments; those coming due in the next six months; scheduled to expire in the next year; and at risk for not being delivered.

While Mayor Henrietta Davis wants an inventory of the vacant lots and derelict buildings the city could buy “to add to the city’s open space inventory for other city uses,” Cheung wants to prevent there being any, asking city managers to explore ways to keep property owners from leaving sites undeveloped or unrented, benefiting them while harming their neighborhoods.

“Some cities have instituted vacancy taxes and penalties … to prevent landlords from shuttering stores that create jobs and [add] economic vitality to a community,” Cheung said. “Cambridge seems to have some large absentee landlords which are leaving land and storefronts empty in an apparent attempt to land-bank them at the expense of the residents.”

The city already has ways to add to the stock of affordable housing and open space, namely the Community Preservation Act, and a letter from City Manager Robert W. Healy outlined a council options for spending the year’s $10.7 million of those funds — with 80 percent or $7.7 million going to affordable housing; $2 million for open space purchases and improvements; and $965,000 for historical preservation.

In further open space issues, Cheung is asking the city to explore creating a bike path “alongside the commuter rail line or along the old haul route.” A report from an Aug. 6 meeting of the economic development, training and employment committee talks about putting such a path next to the Grand Junction Railway for bicyclist and pedestrians — including public school students — that links Boston, the Massachusetts Institute of Technology, Cambridge neighborhoods and Somerville. In slow-moving municipal style, a Cambridge Green Ribbon Open Space Committee decided in 2000 that the path was “a top priority,” and the Eastern Cambridge Planning Study the next year also recommended it be created. A 2006 study resulted.

The councillors’ initiatives are largely slow-moving as well, referring questions to committee or, like Toomey’s, taking first steps such as going “on record” with an opinion in one case and seeking a report without stating an opinion in another.

Lacking a report from police on efforts to find the killers of Charlene Holmes, 16, in a June 3 drive-by shooting, Reeves said, Healy and Police Commissioner Robert Haas are asked to “determine a format” for updating the public on “what is being done to solve this crime and bring the perpetrator to justice.” Healy, though, has a report from Haas on a Aug. 6 talk with youth suggesting they got such an update and were mostly satisfied with police response and felt safe in their city.

Reeves is asking the Government Operations and Rules Committee to publish a schedule of meetings about replacing Healy when he retires next year, and councillor David Maher has a report from the committee from June 22 that began such talks. The major themes: whether to hire a firm for a nationwide search; and whether an inside candidate would be the best way to go. According to the report, Healy said he would have better advice after thinking about the process over the summer.