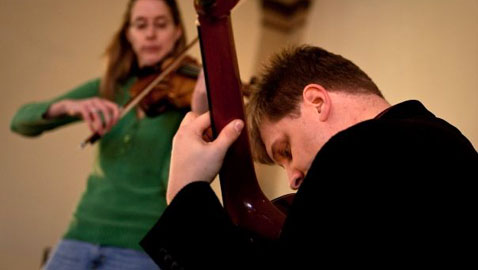 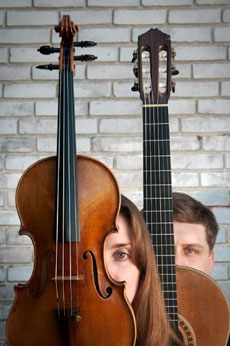 Alt-rock has its share of male-female duos, with Beach House, The Kills, Sleigh Bells and MS MR only some of the latest examples of the genre. The New Boston Duo is gypsy swing’s answer.

Made up of Longy School of Music grads violinist Elizabeth Burke and guitarist George Little, the duo promises “hip music for even hipper audiences,” specifically the jazz-, rock- and flamenco-influenced kind made famous by Django Reinhardt and Stephane Grappelli.

The duo return to their alma mater Friday with a progressive, eclectic sound honed in performances around New England. The due cites the Brick Church Music Series in Williston, Vt., the Kaji Aso Institute for the Arts in Boston, South Shore Conservatory in Hingham and music cafés and open-air markets from Newburyport to Montpelier, Vt., and said it is has moved into direct collaborations with Boston-based composers.

Friday’s show may also bring some intriguing cover versions from unexpected sources that make comparisons with the great duos of rock a little less off the wall.

The opening act is North Shore resident Scott Ouellette, a self-taught guitarist who studied primarily Latin-American and Brazilian styles at the Berklee College of Music.

The show is 7:30 p.m. Sept. 21 at Edward M. Pickman Concert Hall at the Longy School of Music, 27 Garden St., Harvard Square. Tickets are $15 per person at mktix.com or $20 at the door, with discount tickets available to Longy students student ID for $10. For information, please visit  or follow The New Boston Duo on Facebook.