Revels returns RiverSing on Sunday to cheer coming of fall 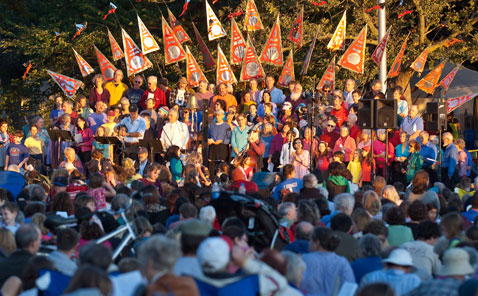 Revels returns RiverSing on Sunday to cheer coming of fall

The nonprofit Revels organization brings its annual RiverSing, seen here in 2009, back to the Charles River on Sunday. (Photo: Sheppard Ferguson)

Saturday is the autumnal equinox, the first day of fall, a day the sun shines directly on the equator and there’s equal amounts of day and night.

Sunday, though, is Cambridge’s traditional celebration — a send-off to summer and welcoming of the months of foliage, Halloween, apple cider and hot chocolate — led as it has been for the past eight years by by the nonprofit Revels organization and its annual RiverSing on the Charles River.

“We’ll sing about 20 familiar, simple folk songs together,” said Alan Casso, a publicist for Revels. (Lyrics will be available upon arrival or ahead of time at revels.org.) “Scattered throughout, Actors’ Shakespeare Project’s Steve Barkhimer and Jennie Israel and Cambridge Poet Populist Toni Bee will recite poetry fit for the season, and we’ll enjoy some great, celebratory music, all in the surrounding beauty of the Charles River and its parklands.”

Many people bring picnics, lawn chairs and blankets, he said, but people looking forward to the RiverSing should remember all the events coming immediately before, starting in Winthrop Park (on JFK St. between Winthrop and Mount Auburn streets) at 3 p.m. as part of the Harvard Square Business Association’s new Equinox Festival:

3:00 to 3:45 p.m.: The New School of Music will present a Kid’s Cabaret made up of students age 7 to 14 who gather each summer to learn and perform songs, scenes and dance from a musical theater repertoire.

3:45 to 4:15 p.m.: Cambridge Historical Tours presents an entertaining half-hour on the equinox in Europe and America, focusing on Cambridge. (Bouts of Historical Jeopardy included.)

5:45 p.m.: A grand procession of musicians, puppets and revels forms in Winthrop Park and make its way to the banks of the Charles for the 9th Annual Revels RiverSing!

6 p.m.: RiverSing at the Charles River