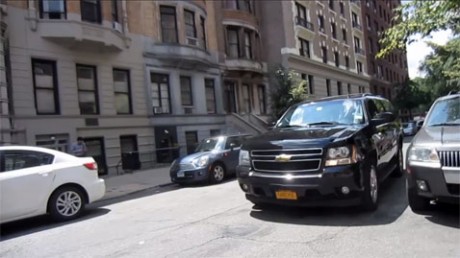 An Uber car arrives in a video posted on YouTube by someone billing herself as a user of the smartphone app and car service. Click on the photo to go to the video.

The Uber car-service app, which lets people call for and pay livery sedans at GPS-estimated rates, has a foe in the city manager’s office and a defender in city councillors Minka vanBeuzekom and Tim Toomey.

She plans to introduce a late order at tonight’s meeting asking for support from fellow councillors in asking City Manager Robert W. Healy to end his lawsuit against the San Francisco company, she said.

“The council has not asked the city administration to continue this lawsuit. I have urged the city manager and his staff to engage in constructive conversation,” vanBeuzekom said. Toomey was the other sponsor on the late order. (Although the City Clerk’s Office did not list Leland Cheung as a sponsor, vanBeuzekom said he was as well.)

Uber operates in Eastern Massachusetts, Southern California and such far-flung areas as Brooklyn, Seattle, Atlanta, Paris and The Netherlands, and Cambridge is not the only city in which it faces continuing resistance from regulators and the taxi industry.

Intervention from Gov. Deval Patrick is credited with turning around the state’s Division of Standards on the business; an order to stop its local operations came and went in August from the division. The city filed its own lawsuit Sept. 14 in Middlesex District Court, and a formal appearance and answer was made Friday. There were no future dates set for hearings, clerks at the court said.

As described Saturday in The Boston Globe:

Cambridge mounted a sting operation against Uber last May and cited the San Francisco-based company for using a nonconforming measuring device for calculating fares and for operating an unlicensed livery. Some government officials say they have no way of knowing whether Uber’s system is accurate and is not overcharging people, unlike with a traditional taxi meter.

The governor isn’t the only Uber user that doesn’t buy the argument about unreliable fare calculations.

“Uber is filling a real unmet need in our community and is operating with a phenomenally high rate of customers satisfaction,” said Sunil Dhaliwal, a Cambridge resident who is whipping up support for the business. He said he is not an investor in Uber, which was founded in 2009, just an occasional user and “big fan.”

“Given the  absence of consumer complaints about Uber and the clear value of its service,  I can only conclude that the city of Cambridge is bowing to pressure from insular and protectionist taxi operators who will oppose competition at all costs,” Dhaliwal said in a letter asking other residents to speak Monday against the city’s lawsuit. “I can tell you without hesitation that I feel far more confident in the accuracy of rates I pay for an Uber ride than I do for a Cambridge taxi fare.”

He accused the city of “stifling the exact sort of innovation and progress Cambridge tries to epitomize.”

Meanwhile, Boston area users got the ability to request a taxi via the Uber smartphone app instead of the usual black livery car Sept. 19, the company said. “Taxi is the latest experiment from the Uber Garage — our workshop of sorts where we tinker with new ideas for urban transportation,” the company said in a press release. “This is for adventurous Uberers only! It may be hard to get a taxi at launch, but you’ll always be able to choose Uber Black.”

During the ride, a taxi driver uses the standard taxi meter, the company said, not the GPS rate estimator, which charges a credit card kept on file starting with a base fare and then charged depending on speed. At more than 11 mph, the added rate is based on distance; below, by time. A tip is included.

Update: The policy order was tabled until the next meeting by councillor Marjorie Decker using her “charter right.”

“I don’t think we should be backing off. We have such a great history with being on the side of consumers in the city of Cambridge and that’s the side we should be staying on,” Decker told The Cambridge Chronicle.