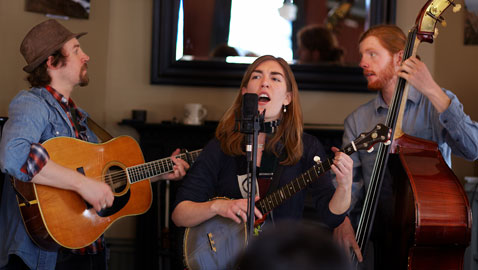 The tale of the founding of The Stray Birds, the roots band performing Wednesday at Club Passim, is almost too good to be true:

Maya de Vitry returns to the farmland of Lancaster, Pa., after traveling Europe by bike and train, making her way as a singing, fiddling street performer. Oliver Craven returned to his Lancaster home, only a few miles away, at the same time after two years touring with Americana artist Adrienne Young as a harmony vocalist, fiddler and guitarist.

Winter sets in. The snow rises.

And in January 2010, the two — stuck in Lancaster and discovering they share a love of American folk music traditions — sing together for the first time.

With the help of bassist Charles Muench and the inspiration of cold, snowy Pennsylvania, The Stray Birds form and record the seven-track “Borderlands” EP, then find their next commonality: They’re not done traveling. Hence an ambitious touring schedule and embrace of live music that brings them to Harvard Square next week.

It’s pretty much home turf to de Vitry. She spent a year and half at the Berklee College of Music in Boston after a single semester at the University of North Carolina at Asheville, a restlessness matched by her bandmates’ easy sacrifice of academia in favor of musical obsession. Of the three, Muench has the most traditional education — a music education degree from his home state’s West Chester University — while Craven, who turned down football scholarships in favor of the mandolin, guitar and Philadelphia’s Temple University, lasted only three years in college.

“I can do my learning in the front seat of a Subaru while crossing state lines,” Craven said. “I listen to people I like, and then find the people they like, and then pay attention to that … It is undeniable that if nothing else, we sure figured out how to make good music.”

The trio has numerous awards and honors to their name, such as de Vitry’s fourth place in last year’s Telluride Troubadour Competition and third in the BMI/John Lennon Scholarship Awards, and Richard Gillmann’s monthly folkradio.org tally of what’s being played by 142 folk DJs gave the band top album and top song (“Dream in Blue”) last month.

Americana fans can judge for themselves, though. The Cambridge show is 8 p.m. Wednesday at Club Passim, 47 Palmer St., Harvard Square. The opener is Three Tall Pines, a New England quartet of similarly young artists. General admission tickets are $15.

In the meantime, check out “Twenty-Five to Life” performed by The Stray Birds on April 12 in The Cook Shack, in Union Grove, N.C.: