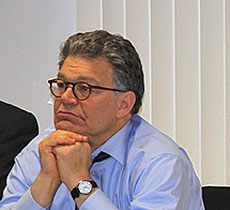 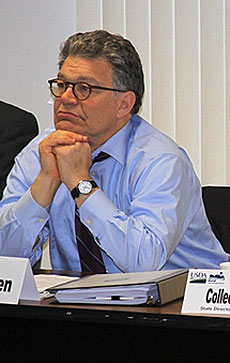 U.S. Sen. Al Franken, a Minnesota Democrat, has been announced to be in Cambridge on Friday campaigning for Elizabeth Warren. (Photo: U.S. Department of Agriculture)

Cambridge’s challenger for the U.S. Senate held by Republican Scott Brown has pulled ahead by 9 points in a poll released Wednesday, but Harvard’s Elizabeth Warren is taking no chances.

She’s bringing in U.S. Sen. Al Franken, once a comedian and writer and now a liberal Senate icon, for a Friday visit to her Cambridge campaign headquarters and rally with leaders in the gay and lesbian community.

“Sen. Franken has been an early and prominent supporter of Elizabeth’s campaign,” said Annie Nagle, a field organizer for the Warren campaign. “He’ll be speaking tomorrow about what’s at stake in this election — for LGBT Americans and for people across Massachusetts.”

Franken, a Minnesota Democrat, is appearing from 2:45 to 4 p.m. at the 1678 Massachusetts Ave. campaign office, Nagle said.