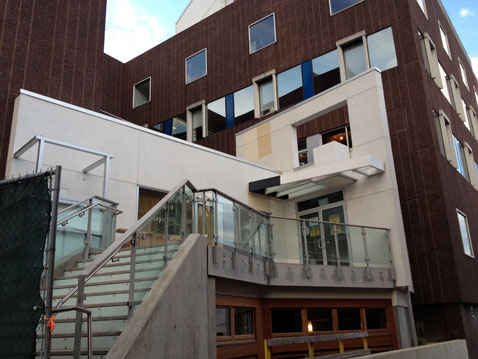 The Sinclair, a nightclub, restaurant and bar at 52 Church St., Harvard Square, has work to do before a planned Oct. 30 opening. (Photo: Marc Levy)

With only a week to go before its inaugural show, Harvard Square’s newest club, restaurant and bar doesn’t have a liquor license, according to the state Alcoholic Beverages Control Commission.

The Sinclair is due to open Oct. 30 with a sold-out show featuring The Meter Men, but the 525-person club and a 104-seat restaurant by consulting chef Michael Schlow are looking dry so far, commission staff said Friday.

As of Tuesday the Sinclair website also still showed no information on the menu or other kitchen information, including whether the restaurant has a separate name. An Oct. 19 wrap-up of activity in Harvard Square nightlife by The Harvard Crimson referred to it as “a yet-to-be-named American bistro.”

Questions about the opening asked last month and Tuesday were directed toward Nicole Kanner, of the All Heart PR agency, but Kanner did not return calls. The Sinclair’s Twitter feed, while active, is also silent about the restaurant and site’s two bars.

This is the second try for a liquor license by the 52 Church St. club and its parent company, New York-based concert promoter The Bowery Presents. It had to refile its request July 25 after its March 5 request was returned with no action taken, commission licensing program coordinator Pat Krueger said.

But the second request remains pending after nearly three months, with no final answer while more information is awaited, the commission said Friday.

Harvard Square neighbors told the city’s License Commission in November that they were worried about public drunkenness, and the three-member commission wound up ordering in January that alcohol sales end at the same time as concerts and that the venue gets three-month and six-month reviews.