Even more delays for The Sinclair nightclub in Harvard Square 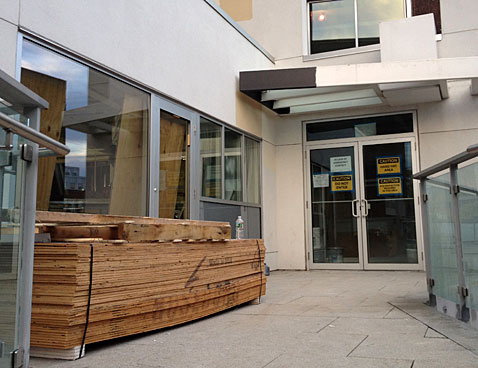 Even more delays for The Sinclair nightclub in Harvard Square

Construction was blamed for delays in shows going on as scheduled at The Sinclair at 52 Church St., Harvard Square. (Photo: Marc Levy)

In what The Sinclair nightclub — and readers and even journalists — must hope is the last such announcement, word came Friday that shows at the Harvard Square spot are either rescheduled or canceled through the weekend.

“From the entire team at The Bowery Presents: Boston, we are very sorry to report that due to unexpected construction delays, The Sinclair will not open on Nov. 16 as we had anticipated,” said a message on the club’s website, expressing “great disappointment” at the moves.

The rescheduling of the Friday and Saturday shows (with Death Grips and Allen Stone) and canceling of the Sunday show (with Trash Talk and Mellowhype) follows a number of similar delays. The club, restaurant and bar was to launch Oct. 30 but the opening has been kicked down the road, not always with every step taken to communicate the problems to ticket buyers; the band The Dirty Guv’nahs was forced to announce its own show’s cancellation by The Sinclair on Wednesday via tweet less than four hours after the club’s box office confirmed the show was going on as scheduled.

Club management never tweeted or mentioned the problem, using the social media feeds generally to portray things as business as usual. On Friday, when managers posted on Facebook about the White Rabbits show scheduled for Nov. 19, a user wrote back: “Are you sure you will be open? My son is so mad you had to cancel this Sunday’s show.”

As of Saturday, the Death Grips show hadn’t been rescheduled, and Allen Stone was bumped to Jan. 20 at the Boston venue Royale.

The 525-person club and 104-seat restaurant at 52 Church St. was announced a year ago and went through the city licensing process over the winter, winning approval in January. Its liquor license was approved Oct. 31, after an eight-month delay. The restaurant is to open in early December, according to The Improper Bostonian.

Questions over the past two months have been directed by Bowery Boston and The Bowery Presents toward Nicole Kanner, of the All Heart PR agency, but Kanner has not returned calls.