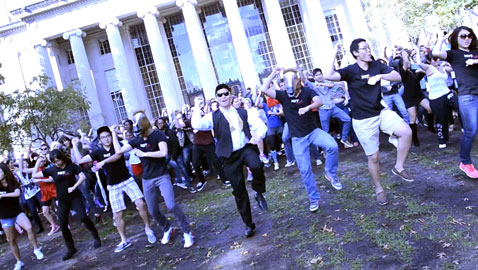 Richard Yoon, dressed as the Korean pop star Psy, leads members of the Massachusetts Institute of Technology community in a parody of the “Gangnam Style” video.

What viral YouTube video features more than 300 students, 28 student organizations and some of science’s biggest names, including Noam Chomsky?

The answer is the MIT parody of “Gangnam Style” by the Korean pop star Psy.

Since its first appearance on YouTube on Oct. 27, the MIT video has accumulated more than 4.3 million views and received worldwide recognition via Facebook, Twitter and Reddit. (Psy’s original video has been viewed more than 770 million times.)

According to the parody’s three masterminds — Eddie Ha, Ingwon Chae and MIT’s Psy, Richard Yoon — the video not only reflected the tight-knit Massachusetts Institute of Technology community, but also brought people together from around the world. They said this support and feedback will likely lead to a “behind the scenes” release in the upcoming months.

The video isn’t the first Psy parody and certainly won’t be the last. In fact, there are rumors that Harvard University’s Korean Association will make its own parody, which will try to top the MIT creation. (At attempt to confirm this met with no comment.)

“Our main goal was to make something that represents the community and that shows the unique culture that we have on campus,” said Ha, 21, who directed and edited the YouTube sensation that takes the unique, galloping dance through parts of the institute community just as Psy dances through scenes of wealth in South Korea. “We tried to show the diversity of MIT. It’s probably one of the best parodies out there that summarizes a community.”

Chae, 21, who produced, said the video did more than just reflect a community; it defied the stereotype often associated with the institute.

“MIT is really science heavy, but we wanted to show that we have sports teams, clubs and a great community,” Chae said. He said the three won praise from fellow students, staff, alumni and viewers from around the world, creating an even larger community. “It’s cool to see how a video that’s not even 10 minutes long can bring everyone together.”

Ha, Chae and Yoon said they filmed more than 1,000 minutes of footage and spent nearly 126 hours filming and editing with iMovie. The video featured some of the institute’s most accomplished professors, such as Donald Sadoway, recognized in Time as one of this year’s “Top 100 Most Influential People in the World” and Eric Lander, who is co-chairman of President Barack Obama’s Council of Advisors on Science and Technology.

Ha, Chae and Yoon said their Gangnam Style parody differs from others because it involved more people and groups and contained a segment featuring MIT’s all-male a cappella group, the Logarhythms.

The three students are curious to see what Harvard will come up with, but Ha said Harvard’s rendition will not supersede MIT’s.

“Ours will still be much better than Harvard’s,” he said.