Prospects are brighter for plans to move, enlarge, rename All Asia nightclub 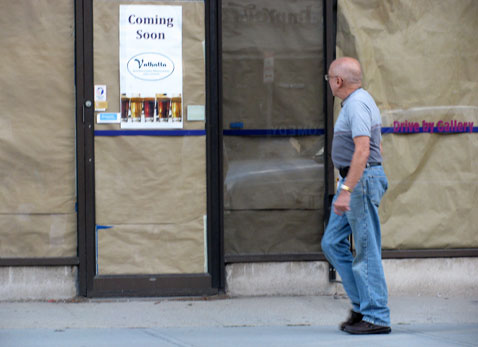 Prospects are brighter for plans to move, enlarge, rename All Asia nightclub

It’s looking increasingly as though the owners of the All Asia nightclub will be able to use a Prospect Street entrance for a new Central Square nightclub — announced as Valhalla in August 2011 and now to be known as Prospect Lounge. (Photo: Marc Levy)

It looked like the All Asia nightclub was going to its Valhalla in Central Square, but now it seems all but certain the proposed Prospect Street rock club, bar and restaurant will get a chance to live on — as Prospect Lounge.

The move has been stymied nearly since August 2011, when co-owner Marc Shulman confirmed All Asia would move from 344 Massachusetts Ave. and change its name. (He said in early December 2010 that the club would be moving, forced out by that month’s announcement the Massachusetts Institute of Technology and its developer, Forest City, planned to build on the block.) At the time, the proposed name was Valhalla, but Shulman and fellow owner Patty Chen had plenty of time to reconsider it; zoning for the area put in place two decades ago says businesses offering entertainment and alcohol must have main entrances on Massachusetts Avenue, and although Prospect Lounge’s address is technically 675 Massachusetts Ave., its entrance is on Prospect, a side street.

At a Nov. 14 meeting of the City Council’s Ordinance Committee due to be reported Monday to the full council, there was unanimous support for tweaking the zoning to allow Prospect Lounge its side-street entrance. The Central Square Business Association, three residents and four councillors supported the change, with yet another council vote — that of Ken Reeves, whose aide John Clifford was one of the residents speaking during public comment — a dead lock for joining in. The zoning change has been a months-long cause for Reeves.

Maher warned that the Planning Board, due to meet six days after the committee, had to weigh in as well.

While All Asia is a cheerfully grubby, cramped space with a small stage and a bar menu trucked across Lafayette Square from Chen’s Pu Pu Hot Pot restaurant, the new space will be 53,000 square feet with upscale cuisine and the ability to attract national acts, Shulman has said, calling it a “premier space” that, while still giving smaller, local acts a springboard to bigger stages, “also allows for a bigger, greater thing to happen in the Central Square area that will put us legitimately on the map.”

Shulman said in October that the Valhalla name had been abandoned in favor of Prospect Lounge, but did not provide details when asked the reason for the change.

“We are feverishly working, behind the scenes, to prepare all the details for our future opening,” he said.