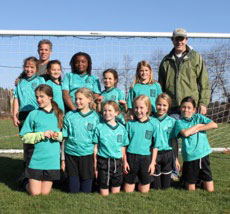 The Cambridge Thunder Girls U11 Boston Area Youth Soccer team was one of four Cambridge BAYS teams to go undefeated this fall. A typical schedule is 10 games.

The next season of games starts April 6. The deadline to enter teams for next season is Jan. 25, with registration opening the first week of January. The U16 and U18 deadline is March 28, with play starting April 21 for a seven-game schedule.