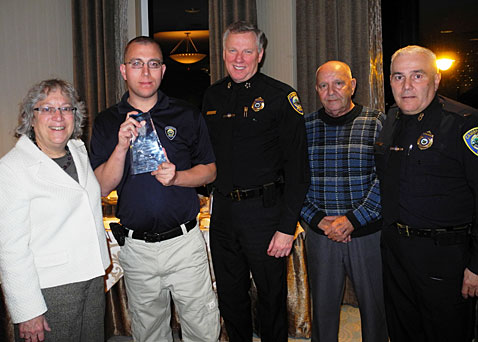 Members of the Cambridge Police Auxiliary were honored last month with a banquet at the Royal Sonesta Hotel.

More than 80 people attended to honor the volunteer efforts of the Auxiliary Police, including members of the auxiliary, their families and friends, members of the Cambridge Police Department, Mayor Henrietta Davis and other city officials.

“Your service is invaluable to us and we want to show you our appreciation for all that you do for our city,” Police Commissioner Robert C. Haas said.

Davis said the auxiliary’s role was vital in providing support at city celebrations and events, helping making sure “Cambridge is a fun place to live.”

“It’s a pleasure to be able to celebrate and honor your service to our City,” she said. “We are lucky to have such a talented and dedicated group.”

Before presenting gifts to all of the members of the Auxiliary Police for their volunteer efforts, Davis, Haas, Lt. James DeFrancesco and Superintendent Jack Graham of the Cambridge Police Auxiliary presented the 2012 Cambridge Auxiliary Police Officer of the Year Award to Jeffrey Forbes for outstanding individual accomplishments and dedication to duty.

More pictures from the banquet are at the Cambridge Police Department’s Facebook page.