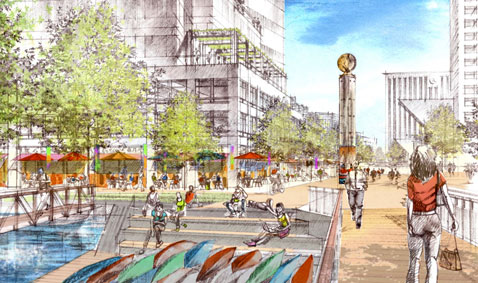 A bid to remake Kendall Square, including around the Broad Canal, was formally resubmitted by the Massachusetts Institute of Technology on Thursday.

A bid to remake Kendall Square via zoning was formally resubmitted by the Massachusetts Institute of Technology on Thursday, with institute officials saying they expected public hearings early next year from the Planning Board and City Council’s Ordinance Committee and a series of internal discussions over the next year to 18 months.

Provost Chris Kaiser said the up to 18 months of debate would be on issues raised by a faculty task force formed after a complaint in June that plans for the square hadn’t taken enough input from faculty, student and staff groups. The issues include a gateway design process, the growth of the East Campus and housing needs.

The main complaint had been that the rezoning proposal for 26 acres in the square committed too much land for commercial development instead of academic and lab space, and for decades to come, when the institute could add to its endowment by serving as developer and landlord for businesses pretty much anywhere in the world.

The new zoning request was made with institute and public feedback, said Kaiser and Steve Marsh, MIT’s managing director of real estate.

“Our petition has evolved and improved significantly as a result of the input received from such a broad spectrum of Kendall Square stakeholders. We’re grateful to the City Council for its vision in establishing the effort, and to all those who engaged so thoughtfully around the future of Kendall Square,” Marsh said.

The official institute summation of the revamped proposal says it:

increases the number of housing units from 120 to as many as 300 (with a mix of low, moderate, market-rate and micro units), provides for innovation space, sets LEED Gold as a standard for all commercial buildings and establishes a community fund for open space, transportation and workforce training.

Discussion of the original proposal began in December 2010, and it was presented in April 2011. It expired that October and the focus switched to work by city consultant Goody Clancy, which was looking at the future of Kendall and Central squares in the so-called K2C2 process.

The Cambridge Chronicle’s Erin Baldassari was at the Planning Board meeting Tuesday as the institute presented the revamped proposal. Her report is here, including a general board opinion captured in the words of chairman Hugh Russell:

It’s a fine tuning, but it’s a pretty significant fine tuning. I feel like they’ve done the job, and I don’t feel like I want to go out and say there’s something more I want you to add to this.